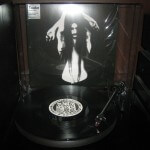 Not sure why the album title has been abbreviated from the original ‘Nattestid Ser Porten Vid’ nor am I sure why I am bothering to review another record released by this label. Let’s face it: Peaceville has become a complete parody of itself, a laughing stock. None of their new releases are worth bothering with and they just continue to live off former glories, re-releasing and re-hashing decent albums from their back catalogue (and others’) over and over and over again. Not quite as bad as Earache (what a joke they have become!) but flogging a dead horse is still flogging a dead horse.

Anyway, even though I acquired the CD editions on Wounded Love, I missed Taake’s first two full-lengths on vinyl first time around. Alas, for once, Peaceville’s reissues have worked in my favour as I made the most of the opportunity to acquire these two fantastic and historic LPs (‘Nattestid Ser Porten Vid’ and ‘Over Bjoergvin Graater Himmerik’ (now known as ‘…Bjoergvin…’ for whatever reason)) on glorious black wax.

If you don’t know how important and brilliant these albums are, just take my word for it – mandatory stuff! (No real point in writing a detailed review 15 years after the original release…) In fairness, both LPs are gloriously presented on 180g vinyl, with lovely artwork and a printed inner sleeve including lyrics and some brief notes. On this occasion, my hat goes off to Peaceville. Even if they are jumping on the bandwagon and if Taake is the real star of the show.

Not sure if this version appeared last year or in 2012 but it is still widely available.