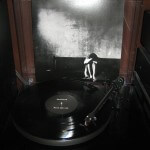 ‘Sacred White Noise’ is by no means conventional, but it is certainly still Black Metal at its core. Manic Black Metal with lots of curveballs, it manages to avoid oh so many potential pitfalls and has won itself a place in my heart. Unlike 99% of other bands who experiment and end up producing horrendous music – the much-lauded but thoroughly insipid Funereal Presence and Krallice take a bow here, please, along with all the other clowns – these anonymous Ontarians are worthy of kudos.