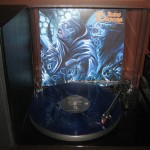 ‘Blood Vaults – The Blazing Gospel of Heinrich Kramer’ isn’t so much a new album as a seismic event. I fear that I’m not a conscientious or wordy enough writer to do justice to Alexander von Meilenwald’s latest incredible opus –a sprawling, 78-minute concept album that beguiles and soothes from start to finish and is a worthy addition to one of the truly outstanding musical canons.

Like all great artists, The Ruins Of Beverast has managed to hone its own distinct sound without becoming tedious; a sound that is instantly recognisable and always thoroughly enjoyable. I’m not sure how he does it, what the magical formula is (sheer genius, perhaps?), but I never think ‘oh, the same shit again – I’ve heard it all before’. Instead, I revel in each new full-length offering from a man who deserves all the kudos and respect he gets.

I listen to all of The Ruins Of Beverast’s albums over and over again (not many bands I can say that about!) and I honestly cannot imagine how anybody could fail to appreciate this amazing art form. Thus, though it does seem to peter out a little towards the end, this is probably one of the safest purchases you are ever likely to make.

As ever, the song-writing is top notch, the lyrics fascinating, the execution of the songs uncannily perfect and the value for money – ‘Blood Vaults’ is twice as long as most albums! – beyond question. The records are housed in a fabulous gatefold jacket with two lovely inlays included. Okay, there’s arguably more doom than black on here – and that would normally bother me greatly – but in the case of The Ruins of Beverast, when the music is so exceptional, there should be no quibbling.

Like its three pristine predecessors, ‘Blood Vaults – The Blazing Gospel of Heinrich Kramer’ is utterly monumental in every way. As they say in the drumlins and watering holes of Monaghan: “he’s some man for one man”.