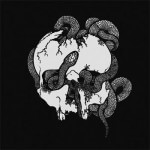 ‘Away From The Haunts Of Men’ is a very good Black Metal album from a band with a crap name. I don’t know an awful lot about this Australian act but the fact that the debut album surfaced on Total Holocaust was recommendation enough for me. I parted with my hard-earned cash and I’m glad I did. I don’t normally like spending money so make of that what you will…

Even though ‘AFTHOM’ isn’t a genre-defining release by any stretch of the imagination, it’s a very enjoyable full-length nonetheless. I must admit it took me a while to get into this one-hour offering. The first four songs – decent and all as they are – don’t do much for me at all. It’s only really when the more varied ‘Torrent Of Death’ breaks the monotony up that I raised my eyebrows. From there on, I was hooked. Prior to that, it’s impressive but standard fare. Solid but nothing to write home about.

However, from the midway point onwards, this album takes off in a big way. I’d go so far as to say that there is a complete switch in focus; the first half of the album and the second half are at total odds with one another. Tracks like the delicate instrumental ‘To Velvet Blackness’, the nine-minute flesh-stripping deviant ‘Ranks Webs’ and the at-times fierce & ferocious eleven-minute epic ‘Robe Of Flesh’ – the highlight of the album by some distance as it ebbs and flows with tremendous majesty, meandering between a multitude of moods and intentions – showcase a more experimental bent to Thrall’s hitherto hammer-and-tongs modus operandi and the result is a more balanced, dynamic and ultimately more enjoyable journey.

I’m not particularly impressed by bands that just chug along at the one speed for an entire album; I prefer gear changes and variation – so Thrall’s ability to shift seamlessly between mid-paced passages and more chaotic blasts works quite well to my ears.

As I said at the top of the show, this is ‘a very good album’. It’s nothing extraordinary but it does have an indefinable charm that most CDs lack. When Thrall get adventurous – as they do frequently in the latter half of ‘AFTHOM’ – they are superb. Just a pity the first four songs are so uninteresting. Still: hard to go wrong with this one.