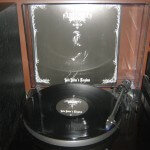 This record popped up in the Iron Bonehead webstore a couple of weeks ago. I liked the look of the cover but had never heard of Unhuman Disease before. Five seconds of Satanic surfing later, I had learned that it was a solo effort of Nocturnus Dominus, who is involved in up to seven other bands, one of whom – Rituals of a Blasphemer – I really like. So I took the plunge.

‘Into Satan’s Kingdom’ – the fourth of six full-lengths unleashed under this particular banner – doesn’t disappoint. It delivers three-quarters-of-an-hour of decidedly evil and puerile Black Metal, paying homage to an entity that doesn’t exist.

As with the likes of Satanic Warmaster, your non-metal friends and family will mock you for eternity if they catch you listening to this. But fuck them, who wants to be all mature? Celebrate your idiocy with ‘Into Satan’s Kingdom’.