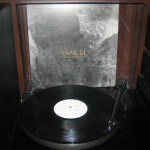 Vanum’s debut full-length, ‘Realm Of Sacrifice’, represents one of those occasions where you instinctively know with tremendous confidence that a record is going to be great; one you could buy blindly. It’s pretty expensive to purchase in Europe but the quality of the music outweighs this inconvenience tenfold.

As the two individuals involved have been responsible for some of the best Black Metal to have come out of the United State in the past five years – one in Fell Voices and Vorde (as well as Vilkacis and Yellow Eyes); the other in Ash Borer and Predatory Light – it was abundantly obvious prior to the event that their collaborative effort would be special.

From start to finish, ‘Realm Of Sacrifice’ is utterly superb; emotive, organic Black Metal that reeks of mountains and oceans, pregnant with atmosphere and imbued with a manliness that most acts can only dream of. This vinyl edition of the album also features lyrics to the four epic anthems and some sheets of artwork that capture / embellish the all-pervading cataclysmic mood. Symbolising nature, I assume, the most powerful force of all.