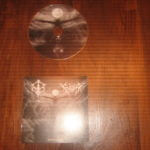 Where there are members of elite trail-blazing Basque entities Nakkiga and Sentimen Beltza involved, then the chances are high that something very special is in the offing. And, true to form, ‘Urmahell’ – an unholy alliance between Ur and relative newcomer Gaua – delivers 35 minutes of soaring-like-an-eagle underground Black Metal besieged by longing, anguish and heartfelt sentiment.

Ur’s epic, soul-stripping lamentation, ‘Aintziraren islada’, marries traditional, folk-honed, atmospheric Black Metal – in a Drudkh vein perhaps but borne of the verdant hills, valleys, plains, forests and mountains of the western Pyrenees as opposed to the Slavic mythology of the Ukrainian quartet – with strange, shrieking howls, to produce an absorbing slab of rich, varied, beguiling music.

As a counterpoint, Gaua presents ‘Luna’ – more straightforward, more aggressive, more familiar-sounding. Laden with hostility and rage yet, through devilishly melodic passages, still subtly imbued with the keen sense of pathos / pride that Ur espouses. There’s an abundance of variety between the two songs and also within each one.

Flowing like powerful, violent rivers through timeless lands, both offerings are uniquely majestic, emotional and forlorn, including some acoustic (Ur) and bluesy (Gaua) parts, but there’s also harshness and bleakness at work forging a dynamic that elevates the music to a level of greatness.