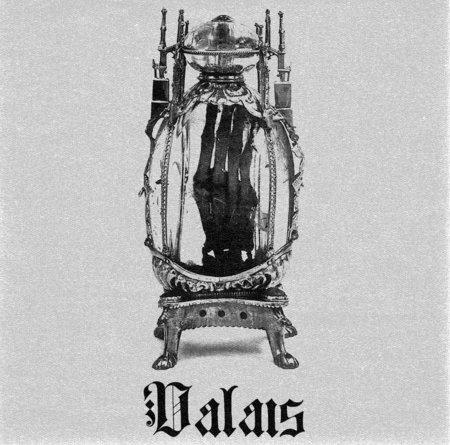 From the totalitarian dump that is Ireland appears without warning a fierce new force spewing a novel strain of deranged occult Black Metal with uncanny passion and prowess. ‘Valais’ comprises five intriguing offerings in total, simply titled using Roman numerals, ‘I’–‘V’, three lengthy tracks of swarming, dense, rock-infused necromantic darkness broken up by a couple of equally-haunting and unnerving instrumentals. All in all, this is a thoroughly unsettling experience, the sonic equivalent of a nightmare within a nightmare, an unlikely alchemy channelled into existence by members of Slidhr and Destriers, who have produced a rarefied recording that’s vaguely familiar yet tantalisingly elusive.

Within a different context, the shrill piano of ‘II’ could almost be construed as comforting or reassuring, but not here, sandwiched between two heaving monoliths of decadent black poison, luring the listener into a false sense of security only to cascade torrents of bleakness and negativity through the speakers / headphones. Or perhaps you are one of those pricks who listens to music on your phone… The guitars are resplendent, stellar, eerily addictive; rasps corrosive; drums ominous and unforgiving; while the occasional inclusion of choice samples really succeeds in enriching and enhancing the already decidedly disturbing nature of the music.

The epic ‘V’, which clocks in at almost 14 minutes, best epitomises the balance between ancient and slightly progressive soundscapes that permeates ‘Valais’, warping conventions and twisting expectations, resulting in a very unique and singular experience. The instruments can glide along with ease but are also jarring and dissonant at times, the vocals vicious and full of hatred and bitterness – a confident brew of jarring, haunting misanthropy that makes no effort to pander or comply.

Spectral and cosmic, disjointed and unhinged, awkward and obstinate, infectious yet deplorable, ‘Valais’ is difficult to describe or categorise as it is neither one thing nor another yet many elements co-existing at once and not always in harmony – one of those albums where the sum of the individual parts bears no real resemblance to or relationship with any of those constituents but appears to take on a life of its own. The duo behind this act have opted for an abstract and unconventional approach to deliver a record that doesn’t give a flying fuck. If you’d prefer something safe and by-the-numbers, I’m sure there’s an inoffensive, fun Seth album somewhere with your name on it.