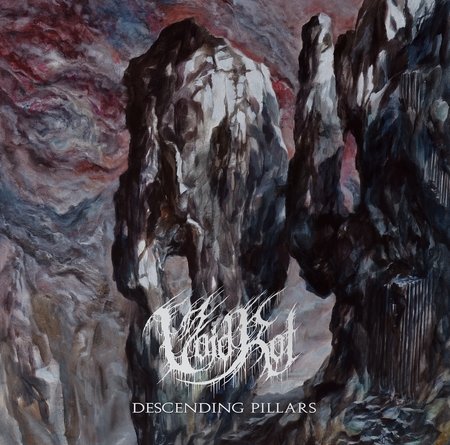 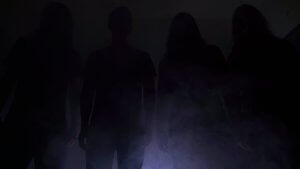 While foretelling or longing for humanity’s demise is nothing new to Death Metal, it’s detailed here from a novel and interesting perspective, forewarnings of imminent extinction appearing wholly relevant and perhaps deliberately symbolic / metaphorical in the times we live in today, with the world teething on the cusp of an unprecedented – and warranted – meltdown.

The music is as fascinating and distinguished (and empowering) as the concept behind ‘Descending Pillars’. Matching the towering, visionary and genuinely disturbing narrative, Void Rot’s skilfully-executed, precisely-delivered, slow-paced, doom-infused Death Metal is suitably terrifying and unnerving, no need for excess speed when you have such mastery of mood and dynamic.

With spectacular, omnipresent death mantra drumming prominent in the mix, accompanied by contorted riffs and haunted howls, this is indeed a terrifyingly-accomplished journey through a fault line in time and space towards an unthinkable fate where science fiction and horror collide – 2020.

Musically, Void Rot sounds more void than rot to my ear, their creepy compositions reminiscent of stellar bands such as Krypts, Altarage (that drumming…) and Spectral Voice, but delivered more slowly, measured, meticulously and all the more sinister for it. Within the infinite vastness of the multiverse we are but meaningless dots, destined for death, by whatever means. And in space, no one can hear you scream.