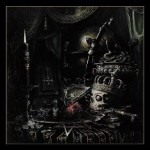 The title track on Watain’s fifth full-length sounds – at best – like a hybrid of Europe and Pink Floyd. In other words, it is complete and utter garbage. The sixth offering, ‘They Rode On’, is even worse: probably the greatest abomination I have ever heard under the flag of Black Metal. Imagine a mixture of Poison and ‘Dead Or Alive’-era Bon Jovi only with crappy Eurovision-style vocals, if you can.

Sounds bad, eh? Well, believe me, it is even worse than that. Fucking shameful, shameful, shameful shit. It doesn’t matter what the rest of the album sounds like (bland as a salad sandwich, by the way), Watain have shat all over their legacy and they no longer deserve support. I don’t give a flying damn how many glossy limited editions of this album exist or whether the double vinyl will be on red or black wax or about stupid box sets with bonus seven inches and fucking altar cloths.

There were signs of decline on ‘Lawless Darkness’ but nothing prepared me for this. ‘The Wild Hunt’ is so terrible, ill-advised and pompous that I will never be able to listen to my old Watain records again. It’s no surprise that Century Media is associated with such an awful album but the pathetic nature of this outrage is 100% Watain’s own fault. This is so bad it hurts.

They Rode, indeed. Fuck off, Watain.