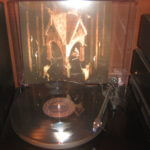 Wolves In The Throne Room were a breath of fresh air when they struck with their ground-breaking debut album, ‘Diadem Of 12 Stars’, way back in 2006. The Weaver brothers came at Black Metal from a decidedly environmentally-conscious perspective and I believe they once dwelled (perhaps still do?) in a self-sustaining farm compound of sorts where they produced their own food and forged an independent existence far removed from the ills of the modern world.

Cascadian Black Metal was born and WITTR were the leaders of the nuevo-pagan pack, at one with nature, the lakes, the mountains, the forests and the ancient spirits. As well as their noble, stand-up image, the music was also excellent. For various reasons, not all of their subsequent releases were as essential as the debut and I had almost lost interest before ‘Thrice Woven’ dropped this year.

Comprising four lengthy offerings and the fleeting ‘Mother Owl, Father Ocean’, these two records are majestic. Everything atmospheric Black Metal can – and should – be. With Steve Von Till of Neurosis on guest vocals ‘The Old Ones Are With Us’ is the obvious centrepiece of the album but, the more I listen to them. the more I enjoy all four of the main tracks.

Comes in a sumptuous gatefold jacket with a beautiful booklet (and lyrics) included, the records spinning at 45rpm for optimal audio playback quality and maximum payback. This will cost you more than most other double LPs due to the limited distribution, but is worth every cent. An astounding exhibit of mystical art.