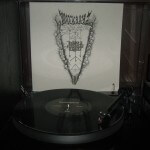 Wulkanaz’s debut album was originally released on cassette – limited to 147 units – last November and ‘HaglaNaudizEisaz’ now re-emerges on vinyl, this edition with a more generous limitation of 300. Altare is likely to have no difficulty shifting these for a number of reasons, not least of which is the quality of the music contained hereon. Short it may be – at just over 31 minutes – but ‘HaglaNaudizEisaz’ is still a fascinating volume of work with some splendid, adventurous, unpredictable analogue Black Metal magic on display.

To be overly-critical, I find that the eclecticism and eccentricity drops off towards the end of Side B as inspiration levels seem to wane (there is also a really shitty bad-sound episode in the middle of the second side) and, as a consequence, things almost threaten to become monotonous and / or tedious … but not quite!

By and large, disappointing finale notwithstanding, this is a thoroughly-commendable effort from one of the most obscure acts operating in the underground right now. Mid- to fast-paced, off-the-wall and refreshingly different, Wulcanaz is an individual deserving of attention.

He appears to be quite prolific, too, so I’m looking forward to hearing more from him soon! The record looks stunning, with a sumptuous gatefold card cover and a twelve-page booklet included. Although probably not as mandatory as its successor, ‘Paúrpura Fræovíbôkôs’, ‘HaglaNaudizEisaz’ is still a record that should be hunted down at all costs.