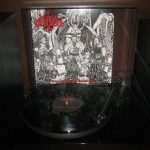 Black Devotion’s debut full-length, ‘Ceremonial Rituals Of Demonic Chaos’, is one that’s been flying well below the radar for about a year now but deserves a lot more attention than what it’s been afforded.

Without hype or the support of a clever, well-connected label, many great underground releases just disappear into obscurity and this is one such effort.

There’s half an hour’s worth of solid Death / Black Metal on here, featuring the eminent Nocturnus Dominus of Unhuman Disease infamy, and I believe it’s well worth checking out, especially if you can’t get enough of Archgoat and their ilk in your life.