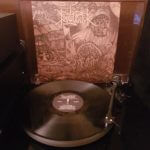 Boasting ties with Blodfest and Ogdru Jahad – two acts I passed comment on in what seems like a previous lifetime – dastardly Danes Deiquisitor churn out nine choice slabs of thought-provoking, unearthly and uncompromising Death Metal on their sophomore full-length, ‘Downfall Of The Apostates’.

The sound is heavily indebted to one of my all-time favourite DM hordes, namely the legendary Immolation (and Incantation, too), the lyrical themes dealing with conspiracy theories, occult science and extra-terrestrial existences … topics that would not feel out of place on an Immolation record, either.

Having missed the self-titled debut full-length (something I’m in the process of rectifying), I opted to buy this record due to the current buzz around Danish Death Metal and my partiality towards a blast of Undergang every now and again.

All in all, though on many accounts ‘Downfall Of The Apostates’ could be hastily dismissed as just another albeit solid Death Metal album (and how many of those does anyone truly need?), the simple fact is that this is an outstanding record in its own right. And it sounds fucking fantastic through headphones, perhaps the litmus test.

Completing the package, complementing the terrific music on offer, the label has pulled out all the stops in terms of presentation: the cover and artwork reek of class, with full lyrics (which make for a very enjoyable read … the truth is out there) included on the insert and a poster thrown in for good measure.