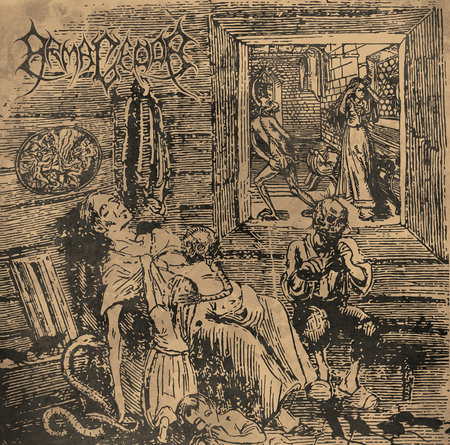 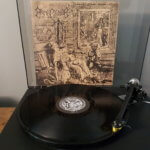 The perpetual pain and mental torment of a summer of seemingly-endless misery and despair was interrupted – albeit temporarily – by the unexpected reappearance of Armagedda, the Swedish Black Metal cult who had lain dormant, presumed dead, for all of 16 years since the release of their landmark third full-length, ‘Ond Spiritism: Djæfvvlens Skalder Anno Serpenti MMIV’. Initial signs were encouraging as ‘Svindeldjup Ättestup’ featured artwork wholly reminiscent in tone and shade of its magnificent predecessor, while the inclusion of a song called ‘Ond Spiritism’ suggested that the new record was going to be a sequel in all but name.

As it happens, although unmistakably Armagedda, ‘Svindeldjup Ättestup’ is quite some distance from being ‘Ond Spiritism II’, which with the benefit of hindsight is probably just as well. The latter, released in 2004, was years ahead of its time – a truly monumental ejaculation of obscure, eclectic and manic Black Metal madness. It’s one of my all-time favourite records and I dearly wanted to hear more of the same. However, Armagedda in 2020 sounds more refined, more grounded, even bleaker and less adventurous. The result is an album that’s markedly different from anything else in their back catalogue but nevertheless as infectious and enthralling as the previous output.

Unhinged decadence and perverse degeneracy abound across these seven tracks, comprising 49 minutes of rank, putrid poison, like dry rot slowly sinking into the spirit, suffocating the soul, wringing out all hope and all life. The sound and aroma of rusty blades, dusty coffins and ancient earth seeps through the speakers, filling the ears, the nostrils, the mind, decay the dominant force as nature takes hold and life slips away.

Harsh, twisted, haunting vocals decrepit and cursed enough to send shivers down the spine are complemented by ominous, repetitive riffs – mostly at mid-pace as skilled creation of atmosphere triumphs over needless aggression – while Armagedda’s trademark, threatening, intimidating, precisely-placed percussion drives the music along inexorably, the earthy, organic production leaving ample room for all the filth to flourish, ‘Svindeldjup Ättestup’ captivating from start to finish, lush and enchanting eleven-minute denouement ‘Evigheten I En Obrytbar Cirkel’ an appropriately-placed reminder of what we’d been missing these past 16 years.