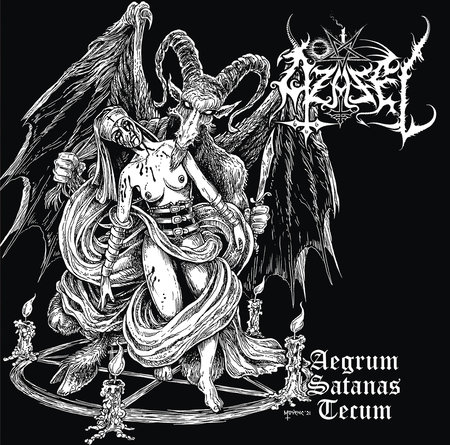 As ever, there are no frills or fills to Azazel’s uncompromising brand of abhorrent, disgusted, depraved Black Metal but they are by no means a one-trick goat, either, as the change of pace and mood (but not atmosphere) on ‘Welcome to Church Bizarre’ betrays another level of twisted sinister deviance. The third track is slower and sicker, more loathsome, driven by versatile and dextrous drum patterns, possessed, rabid vocals and freezing riffs transported directly across time from the early ‘90s.

The almost anthemic ‘I Worship Him’ reeks of corruption and bristles with unswerving Satanic devotion, while the unforgettable ‘Demons Attack the Nun’s Chapel (Aegrum Satanas Tecum)’ is literally the sound of debauchery and evil incarnate. Azazel have an innate capacity to conjure darkness and prove throughout ‘Aegrum Satanas Tecum’ that they remain one of the purest purveyors of Finnish Black Metal done the old way, forged in ice and fire.

Each offering a bestial, profane black spell adeptly channelling evil, dread and inexorable Satanic might, these demons are blessed with an uncanny knack for delivering devilishly clever, effective and evocative blackness that is at once memorable, engaging but also ugly and uncouth. ‘Jesus Perversions’ and ‘Witches Deny Holy Trinity’ are both exceptional records and ‘Aegrum Satanas Tecum’ – their third full-length inside a decade, culminating in the orgiastic outbreak of wanton wickedness that is ‘In Nomine Dei Nostri Satanas’, complete with an involuntary spew of projectile-vomited vocals – is a worthy addition to Azazel’s unholy, Nazarene- and nun-defiling discography.