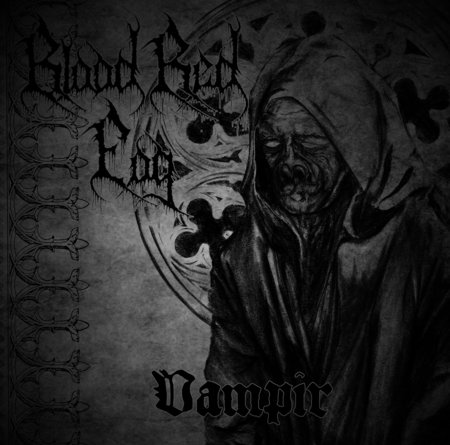 With ‘Vampir’, Blood Red Fog escort us on an unlikely and welcome journey back to their embryonic era, disinterring from their bleeding archives for posterity a long-lost recording from 2006 – the same year the Finns delivered their self-titled debut full-length. Initially composed as one half of an unfulfilled split release with an unnamed act, ‘Vampir’ remained unreleased until now. Remastered earlier this year, the recording now rises from the tomb as Blood Red Fog’s sixth full-length.

As it was chronologically realised closer the outset of Blood Red Fog’s existence, this release represents in many ways the very epitome of a band going back to its roots. Quite literally rolling back the years, BRF offer forth two epic lamentations (each surpassing the 20-minute mark) of abject desolation. Harrowing and forlorn, this is music that weighs heavily on the psyche, crushing the spirit and heralding all-consuming darkness.

There is no hope to be found here, just 41 minutes of stark, slow-mid-paced misery and soul-scarring negativity. Unhinged and deranged, ‘Vampir’ is haunting and unsettling, while ‘Agonizing Existence’ sounds pretty much as the blunt and succinct title suggests – like the soundtrack to an unbearable stint in an asylum run by lunatics. A bit like living in the world in 2021, really.

Even though the music is laced with melody and occasional flourishes of majesty, the darkness that lurks at the heart of Blood Red Fog is evident throughout this album, which lays bare and celebrates the suffering, hopelessness and despair that humans invariably experience at certain junctures along our preordained journey to the grave. Some are, of course, inflicted more than others but in the end we all succumb to the indifferent hostility of time.