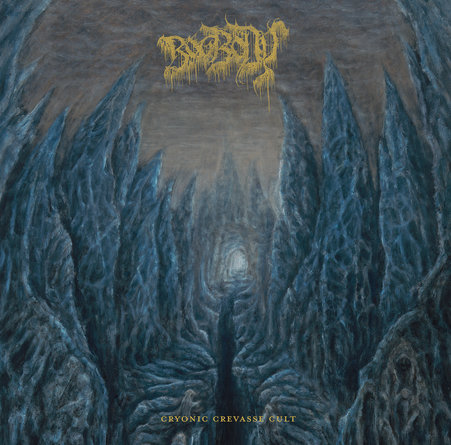 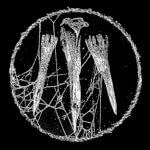 The uncannily skilful deployment of bass, drums and vocals alone lends Bog Body’s music a disturbing, organic sense of decay and this is clearly no gimmick as it’s difficult, nay impossible to imagine debut full-length ‘Cryonic Crevasse Cult’ gaining anything at all were guitars to be used. In fact, such is the splendour of the subterranean rumblings conjured by Bog Body across their relatively-short but mightily-impressive recording career thus far, adding guitars – the staple ingredient of virtually all Death Meath and Black Metal – would almost certainly lessen the impact and detract from what this unique New York duo deliver so potently.

While this is a debut album, clear signs of what might come were granted previously on the ‘Through the Burial Bog’ MLP and ‘The Gate of Grief’ – Bog Body’s ghastly contribution to their captivating split with Primitive Warfare. Rot, decay, decadence and filth are disinterred once more on ‘Cryonic Crevasse Cult’ – a staggeringly-accomplished 34-minute recording comprising eight awe-inspiring offerings at the altar of malignancy.

Cavernous and corrupt, horrific and nightmarish, somehow rooted in the rank earth itself, the music of Bog Body is timeless and almost incomparable (for obvious reasons), although the dark and wretched black-death-doom vibes emanating from their crypt do call to mind a Coffins here and a Defuntos there, a Beherit or Ride For Revenge here and a Disembowelment there…

Craft well and truly honed in advance, ‘Cryonic Crevasse Cult’ constitutes an absorbing listening experience from start to finish, with not a weakness audible. The dank dirges predominantly unfurl at slow-to-mid pace, the unnerving atmosphere trumping any need to overly-rely on aggression or speed. Although each track is immense in its own right, the manic ‘Ice Stained Kurgan’ is perhaps worthy of special mention, pummelling at first before slowing down and diverting into more ambient, experimental and primal / tribal realms – not an unfamiliar environ for Bog Body by any means.

All in all, here is a sick and twisted (sub)sonic excursion to brighten up your day and a fitting soundtrack to the fucked-up world we inhabit now.