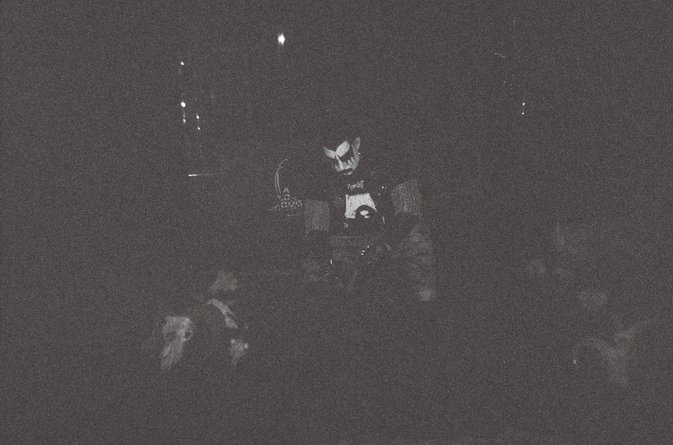 Presenting 75 minutes of raw Black Metal mastery, Kommodus’ self-titled debut full-length is as enigmatic as it is ambitious. The lone wolf behind this intense outburst of auditory violence, Lepidus Plague discusses war, religion, ancient evil, Bandcamp, working with Wrest and the forthcoming physical manifestations of ‘Kommodus’.

Wounds gushing, blades penetrating pliable flesh, bodies piling up, ‘Where Iron And Blood Converge’ is a suitably barbaric outburst of battlefield violence to announce the arrival of the first Kommodus full-length. History / mythology recount countless tales of battles, wars and conflicts that determined the fates of nations and empires, where warriors stood together and faced their foes, knowing death was almost certainly imminent. Are wars a necessary evil or do they highlight the inherent insanity of man?
“Well we wouldn’t be where we are today without thousands of years of war. I don’t know if it’s madness, rather, just the ugliest and ultimate extension of man’s ego and will.”

Some aspects of modern warfare are particularly cowardly, underhand and despicable. It’s unlikely we’ll ever see a major (world) war again as irreconcilable disagreements between privileged nations are more likely to be settled by a suit pushing some buttons or typing. Now we have drone attacks where ‘soldiers’ sit in portacabins in front of computer screens, taking out enemies from thousands of miles away. Isn’t it a sad reflection on our species that, having developed such great technology, we turn it on one another?
“It’s certainly not surprising. I suppose if you can win a war by pushing a button, you’re going to do it?” 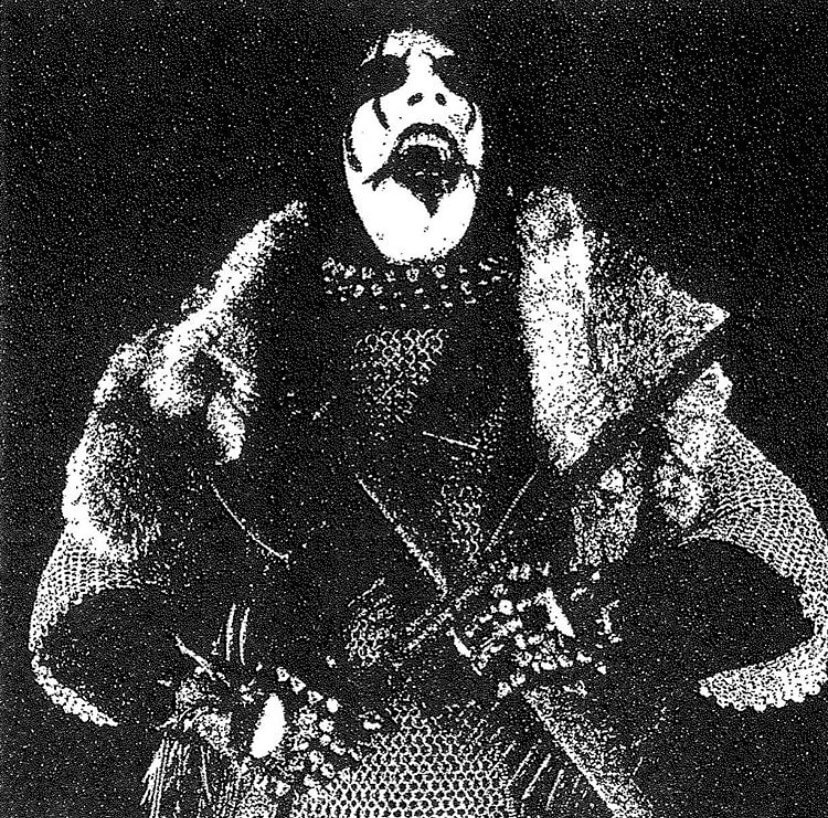 Religion is at the heart of many conflicts and is arguably the biggest plague on our planet. Between them, more than half of the earth’s population practice either Christianity or Islam – quite an alarming statistic considering that science has more or less disproven the existence of any all-powerful monotheistic creator or deity! Isn’t it absurd that so many people still adhere to these superstitions?
“If you’re indoctrinated from day one and never have any access to information or education that proves otherwise, what help do you have? I think there’s elements of beauty in all religions and their mythologies but blind following of any doctrine or ideology has always been, and always will be, dangerous.”

Religion does have one benefit, at least. Either directly or indirectly, it has been responsible at least in part for the genesis of Black Metal. Hatred of religion is the driving force behind many of the greatest Black Metal acts. One blatant example that springs to mind is Archgoat … it’s difficult to imagine them having any purpose if there was no Christianity to scorn! Antichristian, Satanic and orthodox Black Metal are all obviously rooted in a furious reaction to the idea of blind faith. Twisted logic, I know, but it would be a duller existence without this music…
“With every action, there’s a reaction. Satanism / blasphemy is certainly one of the focal points of the genre. However, I’ve always been more enamoured with the other thematics which underpin black metal. Paganism, medieval fantasy and folklore, the natural world, personal catharsis, etc. Everything intersects somewhere, though.” 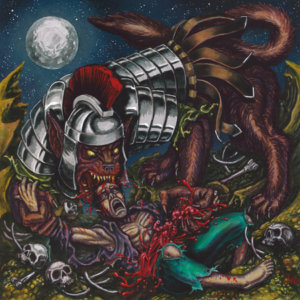 You have penned some wonderful lyrics on ‘Kommodus’. One of my favourite passages is a couplet in ‘Heir To The Line Of Wolves’ where you ask ‘What’s become of Rome, once the guiding light of the world; now corrupted by abrahamic dogma, catholic scriptures unfurled?’. It seems kind of ironic to me that Rome has become a hotbed for Catholicism – Diocletian might turn in his grave if such a thing were possible?
“It was a strange and unfortunate transformation and correlated with the demise of the empire. But I suppose even Roman paganism was just a rebrand supplanted from Ancient Greece.”

Meanwhile, ‘Return To Tribe’ carries another very powerful message. Here you appear to be talking about betrayal that will inevitably follow if one lets his / her guard down and trusts those outside their known and trusted circle of friends and family. Ultimately, it sometimes feels like people can’t be trusted and are more likely to stab you in the back than to offer a helping hand, quicker to insult than to offer a compliment. Should we show respect and affection towards our chosen few only and project misanthropy towards everybody else? Or is everyone deserving of a chance? I suppose we can mostly tell from instinct who is reliable?
“Just be mindful of who was there when the chips were down and who wasn’t, and keep your cards close to your chest. And yes, trust that instinct.”

Thematically, ‘Entombed Beneath Roots And Thicket’ (and the ensuing ‘Zephyrs Blow Where Petrified Giants Slumber’) is somewhat reminiscent of ‘Glacial Ossuary’ from the third Kommodus demo, ‘From The Ashes Of Empire’, telling of an ancient darkness unleashed from the earth to avenge its interment. Obviously this is a fictional scenario – is the message here one of karma or vengeance, maybe?
“I’ve always been obsessed with this idea of some magic being left in the world, ancient creatures that still exist, slumbering deep within the Earth. I also like the HP Lovecraft theme of humans being the equivalent of ants to some titanic monstrosity. Maybe neither karma nor vengeance, just a childhood spent watching monster movies and playing video games that’s manifested into these narratives.” 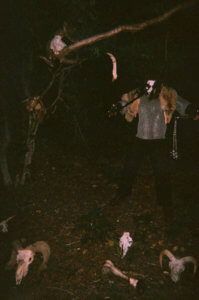 As on the Kommodus demos, you have bookended the main body of music with a calming intro and outro. The decidedly soothing and mellow tone of the similar-sounding opening and closing instrumentals – ‘Black Evangelion’ and ‘Lullaby For An Infant King (Romulus Redux)’, replete with trumpet and acoustic guitar – serves as a stark counterpoint to the raw Black Metal attacks of the ten tracks in between. Do these ambient compositions represent the calm before and after the storm, are they an opportunity for you to display another aspect of Lepidus Plague or do they serve another different creative or artistic purpose entirely?
“Both. They do represent the calm before and after the storm. These songs also allow me to try my hand at different sorts of compositions, and attempt to capture a more ancient, traditional sound.”

The stunning artwork for ‘Kommodus’ was completed by the talented Wrest / Jef Whitehead of Leviathan and Lurker Of Chalice infamy. It must have been a great honour to have such an iconic figure involved? I’m assuming you are a fan of Wrest’s music as well as his art? The depiction is really vibrant and striking … did you provide detailed guidance as to exactly what you wanted, or how much artistic freedom was afforded to the artist?
“It was a great honour. I am a huge fan of Wrest’s music and visual art. I gave him some references. Being a visual thinker, I already had an idea in my head of how I wanted the cover art to come out. That being said, I obviously wanted it to look like one of his paintings. There were no hiccups. I’m very happy with the finished product.” 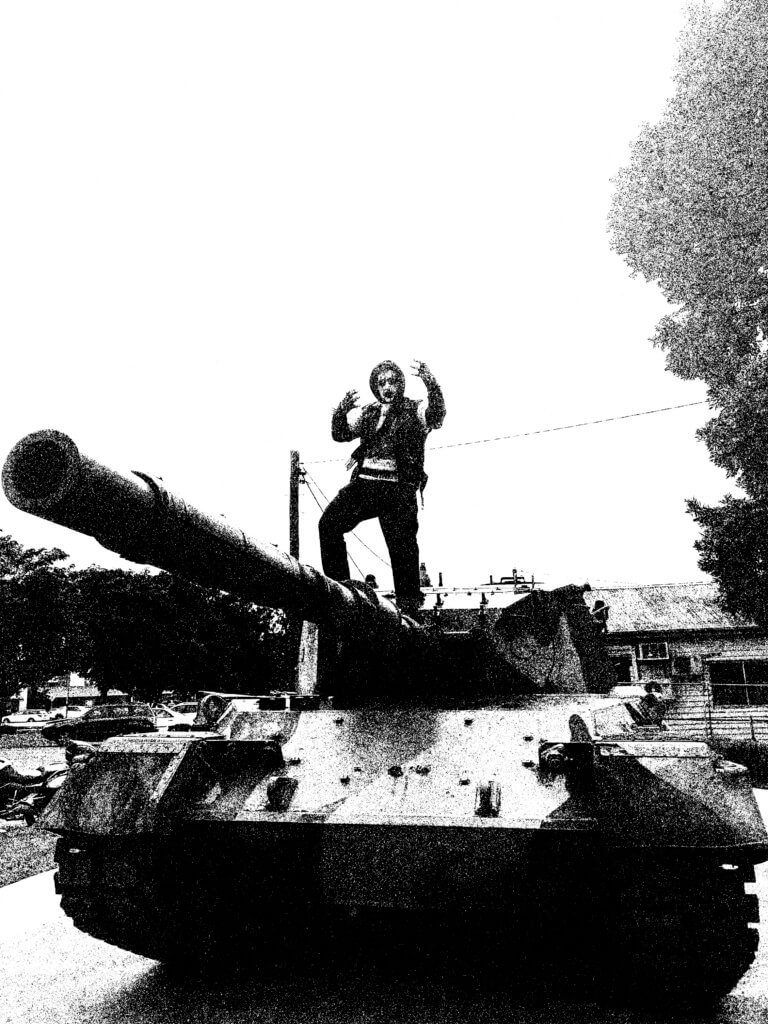 For now, the album is available only on Bandcamp. This is one of the most comprehensive and meticulous digital releases I’ve seen. All the lyrics are included as well as notes detailing what each song is about. Not many artists go to such lengths … was there any reason why you decided to pull out all the stops and give so much away (essentially for nothing as streaming the album and browsing the lyrics and notes is free)?
“I’ve always done this. I figure this way, everyone can get my releases from the source, presented with the totality of how they were intended.”

There have already been physical versions of the four demos and the split with Grógaldr, so I’m sure it’s only a matter of time before we see ‘Kommodus’ released in the various physical media. What plans, if any, are currently in place for vinyl, cassette and / or CD editions? Black Metal fans seem to be particular partial to the black wax … at 75 minutes, this would need to be pressed onto a double LP … anything cooking?
“All physical formats will be imminently releases through Goatowarex. The vinyl will be a double LP, with a picture disc and colour variety.”