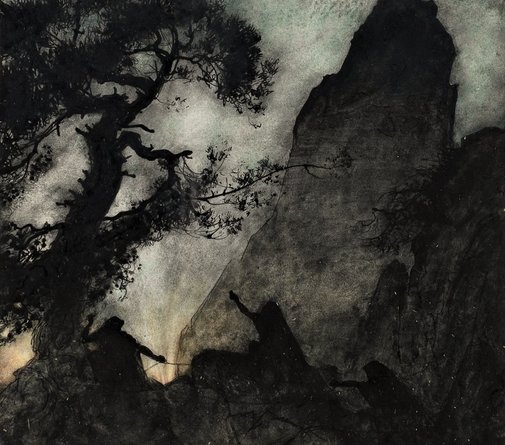 Deeply connected to the earth, the ancient ways and an aspect of humanity that is disappearing more and more with each passing day, Caverne is one of the most evocative, emotional, elegant and downright astonishing forces in Black Metal. There’s an uncanny purity and deeply-embedded spirituality in the music, which is suitably abstract and elusive as well as paradoxically possessing that rare ability to stir up feelings of pride and defiance.

Elevated to another level by the inclusion of fantastically surreal, symbolic, mysterious lyrics composed and delivered in the artist’s native tongue, ‘La Fin de Tous les Chants’ is Amertume’s third full-length under this banner and it continues his exemplary track record of producing authentic, rustic, soaring French Black Metal of the highest calibre. Normally I will run a thousand miles when acoustics and clean vocals are introduced into a Black Metal recording but Caverne does everything with such immense passion and feeling that it’s impossible not to be blown away utterly.

An ambitious recording by any standards, ‘La Fin de Tous les Chants’ is divided into five parts / chants, culminating in the epic, sumptuous, mesmeric 17-minute, three-part denouement, ‘Dernier chant: I – Le philtre / II – La forêt / III – La fin des chants’, which is a masterpiece in its own right, escorting the listener on a vividly rapturous journey back in time, evaporating the decay of modern existence and filling one with wonder. It really is amazingly powerful work.

‘Premier chant: La proie pour l’ombre’ provides an ominous and beguiling beginning to the album, hypnotising, entrancing and vibrant, pregnant with pathos and sorrow yet prompting resistance and strength rather than mourning or surrender. Listening to Caverne is a unique and empowering experience. Here is 51 minutes of harrowing, soul-destroying Black Metal that manages to be devastating and crushing without relying on frenzied riffs, blast beats or high-speed aggression / nihilism.

You will be hard pressed to find a better song than ‘Second chant: La matrice’ anywhere, ever. All in all, the magical ‘La Fin de Tous les Chants’ provides a glorious and majestic soundtrack to these times of terror and tyranny; a timely reminder of how it feels to be fucking human. Vulnerable perhaps but stronger than the oppressors intent on extinguishing our ancestral flame seem to assume.