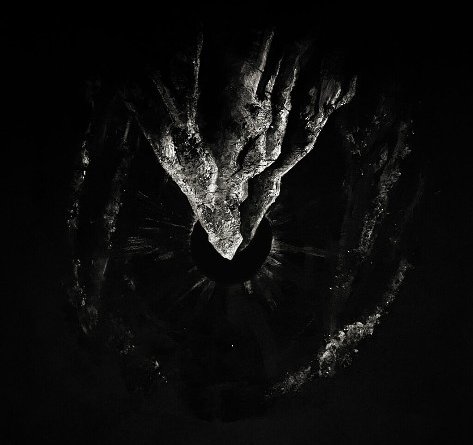 I feared Amertume might drop completely off-grid (in terms of releasing new music) after laying Caverne to rest with the release of third full-length ‘La Fin de Tous les Chants’ during the teeming, tyrannical, transformative summer of 2021, so the appearance of Nécropole’s second album is indeed most welcome. Mind you, so entangled in the unexposed roots of the underground reside both Caverne and Nécropole – starved of the dubious oxygen of promotion, publicity or social media whoredom –it would be an absurdity to inadvertently insinuate that he operates ‘on grid’ in any manner.

Either way, Nécropole is back with the follow-up to 2018 debut full-length ‘Solarité’ and, true to form (albeit with a twist or two), ‘Yoga’ represents another masterclass in triumphant, spirited, soaring Black Metal vigour, driven by rousing melodies, razor-sharp riffing, urgent drums and scarred through to the very marrow by the sole creator’s trademark, instantly-recognisable, inhumanly-hoarse screamed protestations / strangulations, which seem to emanate from the depths of a restless soul itself.

The first of the seven meditations presented, ‘Lustration’, opens in a wash of ambience before transmuting into a purposeful, energetic gallop of intuitively transcendental might, shimmering with esoteric radiance, not sombre necessarily but serious and bursting with positivity. Breaking with tradition, the songs are surprisingly crafted and executed predominantly in English this time – no problem to Amertume as his masterful command of the tongue is decidedly more eloquent than most native users.

Operating a plane apart, bathed in obscurity and imbued with a heroic, conquering might, ‘Yoga’ is an immense exploration of existentialism, perhaps a call to arms (or awakening) or a rite of passage, flowing fluently, seething with an uncanny energy and epic grandeur, evoking triumph, resilience, strength and ultimately vindication and victory – no more so than on the glorious ‘Scivias’. Before that, the organic and twinkling ‘Sound Is The Source’ is so potent, so pure it stirs the senses profoundly, while the equally emotional ‘The Manifold Realm’ is another devilishly-detailed demonstration of unparalleled, goosebump-inducing songcraft and sorcery.

Preceded by the serene instrumental transition, ‘Thousand-Petaled’, the immense, impassioned, brow-furrowing ‘The Yoke’ presents ten minutes of almost ouroboric, nigh-on-immaculate sonic fervour and vehemence to draw the curtain down on a fascinating and wondrous work, the true essence of which always remains tantalisingly out of reach and beyond comprehension.