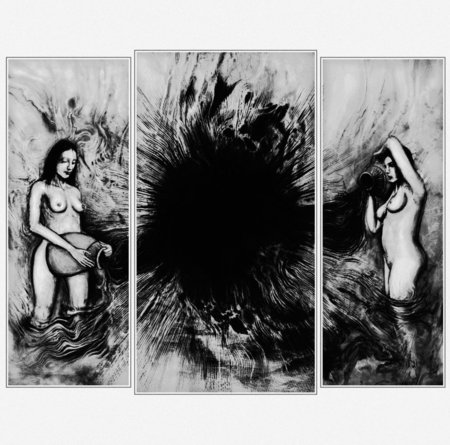 Desolation and darkness permeate every nihilistic note and pained shriek of Mannveira’s debut full-length, ‘Vítahringur’, which oozes oppressive discontentment across its five bleak requiems from the void. Averaging seven minutes, each individual song is an exercise in sheer misery, crafted and executed with an all-consuming sense of rage and despondency that cannot be faked. And somehow the whole is greater than the sum of these parts.

To all intents and purposes the album represents a sharp descent to the lowest depths of the human psyche, the brief and blunt mid-paced stomp of ‘Ópin rjúfa þögnina’ setting the tone, delivering daggers of despair and seething hostility in a captivating and distinctly Icelandic manner. The shortest song on the album is followed by the longest, the ominous and corrupt opening strains of ‘Í köldum faðmi’ heralding disquiet and unease before a detonation of destructive violence triggers an infectious flurry of turbulence and terror.

Listening to the second track on headphones, I can detect some strange haunting sounds drifting in and out of my admittedly-diminishing plane of auditory perception.  Indeed, there is so much detail and finesse beneath the ugly surface of ‘Vítahringur’ – the percussion on the soul-destroying title track being a case in point – that I would highly recommend trying the headphone experience at least once.

The musicianship is excellent throughout and the album has been graced with a fantastic production (by close acquaintance D.G. from Misþyrming, who also helped out with the ambient parts), which allows every harrowing blow to strike and penetrate precisely as it was intended to. Despite what I’ve said about the inherent negativity evident in Mannveira’s music, which can at times be close to overwhelming, ‘Vítahringur’ is my no means a depressive record. It may be coming from a dark place emotionally but it still possesses an adequate profusion of energy, vitality and aggression to qualify as Black Metal first and foremost.

A fresh twist on the dissonant and dizzying Icelandic template and definitely a resounding triumph.