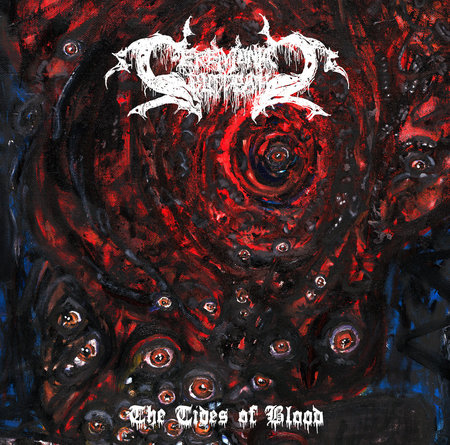 ‘With the aptly-titled ‘The Tides Of Blood’, Ceremonial Bloodbath crafted a twisted malformation of hideous, horrific Death Metal malignancy that is music to the ears of those who appreciate the carnage of hordes such as Vassafor, Altarage, Teitanblood or even Profanatica. As the band members boast a wealth of experience ripping things asunder in a host of other Vancouver underground alliances, it should come as no surprise really that Ceremonial Bloodbath hit the ground running with such a powerful and memorable debut full-length.

Five of the ten sensory assaults comprising this monstrous 47-minute slab – including the devastating title track – are re-workings of compositions culled from the band’s 2017 demo ‘Command Sacrifice’, supplemented hereon by two newer offerings and three short instrumentals, which (although menacing in their own right) afford the listener some semblance of breathing space and oxygen amid the subterranean maelstrom of razor-sharp riffs, taunting leads, pounding, rolling drums and tormented roars from beyond the abyss.

Crude and spontaneous as they may appear, each song is executed with autopsy-like precision, succeeding in inducing suffocating claustrophobia and a level of unease that is attained by only the finest art. Battering and punishing the senses, ‘The Tides Of Blood’ is an album that comes from a dark place and is guaranteed not to put a smile on your wretched face.