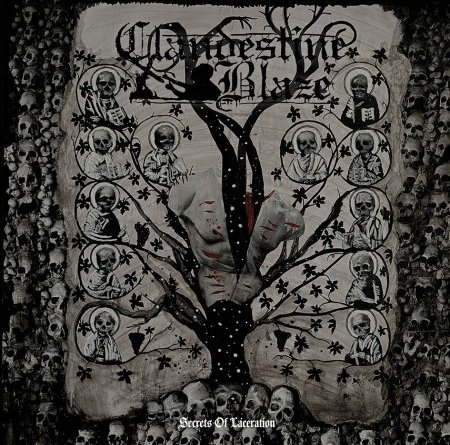 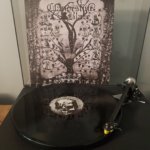 Without ever straying far from the path he first ventured down on ‘Fire Burns In Our Hearts’ all of 22 years ago, Mikko Aspa has with Clandestine Blaze constructed a surprisingly diverse discography now numbering no fewer than eleven albums, each of which differs subtly from the previous one. Thus, while the departure detectable from one release to the next may be almost negligible, newest instalment ‘Secrets Of Laceration’ – though still bearing many of the hallmarks of classic Clandestine Blaze – is quite far removed from the aforementioned debut full-length.

Indeed, this one stands out a little from all CB’s previous work due to the grating, wailing, sirening guitar tone that appears on every track – one of the tweaks which can be readily identified as a hallmark of ‘Secrets Of Laceration’, granting it an identity all of its own but without stripping it of its rightful place within the burgeoning Clandestine Blaze catalogue of nonconformity. Some of the slightly more experimental aspects that crept into more-recent albums also appear from time to time and, all in all, this is a very well rounded and wholesome Black Metal record, which – crucially – is still for the most part grim and raw and contemptuous.

Lyrically, Mikko has moved away from those days of yore when he just crudely spat his vitriol out with barely a second thought; now he is considerably more cryptic but seemingly with the same targets fixed firmly in his crosshairs. The outstanding ‘The Human Moth’, for example, is almost certainly slinging arrows at those who swallow the lies and deceit of Abrahamic religion. While religion is the most obvious gripe throughout the album as a whole, it would be doing Mikko a disservice not to note that his protests run much deeper, towards a more general slavish surrender that has gripped humankind across most of its beliefs and behaviour.

Although Clandestine Blaze is the Black Metal act I listen to most, I find it impossible to select a favourite recording. This is because each one offers something different and it depends really on the mood the listener is in at any given time. But, suffice to say that, albeit within the obvious limitations of misanthropic Black Metal, CB has crafted over the decades a rich variety of sounds and ideas. ‘Secrets Of Laceration’ is perhaps the most competent and accomplished record of all, musically soaring, unexpectedly ambient at times (such as on the serene yet crushing Babylonian lament ‘Stripe In The Sediment’), and granted a fabulous, organic production at No Solace.

Yet ‘Secrets Of Laceration’ remains unmistakably Clandestine Blaze and the fire of old burns brightly hereon for 42 reassuringly sardonic minutes.