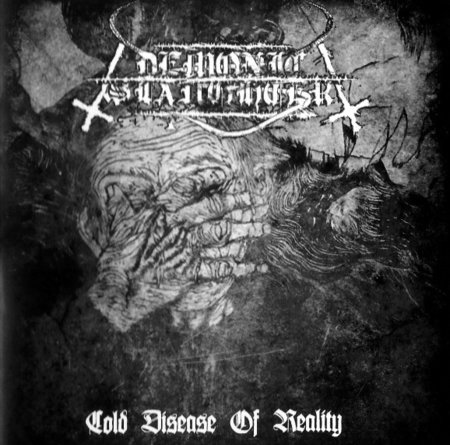 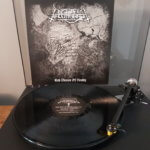 Ungodly Polish entity Demonic Slaughter released its debut full-length, ‘Cold Disease Of Reality’, during the cursed summer of 2009, with this vinyl edition surfacing three years later. Prolific multi-instrumentalist, songwriter, vocalist and lyricist Xaos Oblivion is the principle driving force behind Demonic Slaughter and he certainly oversaw the production of a thoroughly nihilistic and adversarial album here.

The message throughout is pretty clear: there is no god, religion is a sick joke, humanity is a cancer and we will all get the punishment we deserve. Only in the power of nature and through intuitive self-determination and the rejection of conventional norms might we find some form of salvation.

‘Cold Disease Of Reality’ is an excellent slab of nihilism, surprisingly expansive for underground Black Metal, perfectly recorded / produced and graced with a very distant and indifferent character. It’s morbid, pensive, dark and negative and leaves me feeling cold each time I listen. In my mind, it’s definitely a relatively-unknown, hidden gem – vastly superior to most of the derivative and insincere, try-too-hard Black Metal being released today.

Unsurprisingly, as marketing gimmicks abound and fools flock after dubious records of painful limitation with pre-orders from unknown and unheard pretenders selling out in the blink of a cynical eye, this record is still widely available. Belonging to a different era and with an authentic vibe evident across its 48-minute duration (including a bonus Darkthrone cover at the end), ‘Cold Disease Of Reality’ is worth investigating if you missed it first – or second – time around.