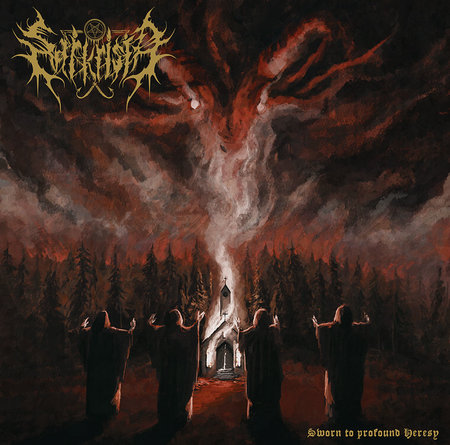 Obligatory ominous intro out of the way, Satan’s loyal servants Sarkrista blaze contemptuously through eight new diabolical spells conceived and delivered in celebration of the horned adversary and His indulgent ways. Like its predecessors, ‘The Acheronian Worship’ and ‘Summoners Of The Serpents Wrath’, Sarkrista’s third full-length is another unapologetic dose of Satanic Black Metal, scorching but with an insidious sense of melody, very much in the vein of Finland’s finest.

Bursting with infernal wrath and unbridled animosity, ‘Sworn To Profound Heresy’ is single-minded and unswerving in its dedication to darkness – a cursed and possessed offering that is instantly familiar-sounding as it for the most part pays homage to the influences Sarkristra wear so proudly on their sleeves. Beseeching plague and pestilence at the hands of the enraged morning star, vengeful curses like ‘Ablazing Ritual Torches’ and the particularly-anthemic ‘The Chosen Ones Of Satan’ seamlessly merge malevolence with melody and do so with uncanny ease.

It appears that Sarkrista was pared down to a two-piece for this album (Revenant and Exesor). They enlisted some assistance from guest vocalists on three of the tracks, most notably Nocturnal Depression’s Lord Lokhraed on the aforementioned ‘The Chosen Ones Of Satan’, although The Infidel certainly helps elevate the devastating and diverse ‘Destroyer Of The Sun’ (complete with sombre, sinister keys at the end) to another level while Ahma’s ferocious contribution to the epic and memorable denouement, ‘A Whisper From Forgotten Coffins’, also stands out.

Sticking largely with a winning formula, ‘Sworn To Profound Heresy’ is a highly accomplished album which cements Sarkrista’s emergence as one of the finest modern purveyors of insidious Satanic Black Metal. They are not mere imitators … there are touches and traces of their own identity to be found scattered across the album, especially the majestic ambient end to the last song. Fuelled by distain, detestation and indignation, these demonic devotees – cursed, possessed and inspired by His presence – are steadily compiling quite a nasty discography. As the satisfying aroma of burning churches – and scorched sheep – fills the northern night air, Black Metal lives on.