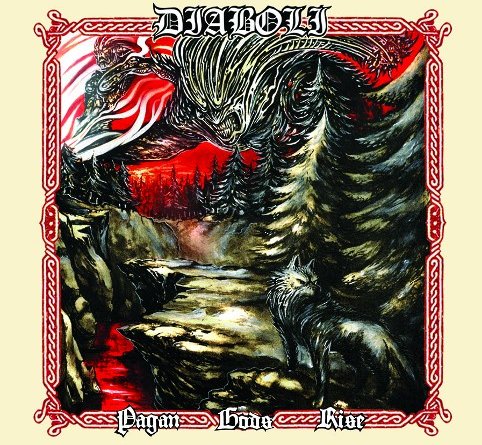 Arriving without warning, the ninth full-length recording of cult Finnish force Diaboli marks 30 years of spreading uncompromising underground art fuelled by vehemence, lamentation, passion, pride and more than a pinch of intolerance. Diaboli mastermind Petri Ilvespakka wears his heart on his sleeve and for three decades his music has fearlessly voiced a singular vision that stands alone today.

Somewhat astonishingly, Diaboli’s genesis goes back as far as those of more-celebrated trailblazers like Emperor, Enslaved, Satyricon, Immortal, Burzum, but the unflinching Finnish lone wolf has adhered more resolutely to his original principles and ethos than any of these. Three decades on from the ‘Descent into Hell’ demo, Diaboli sounds as relevant and vital as ever on ‘Pagan Gods Rise’, which was recorded during spurts of creativity seven years apart – in 2013 and 2020.

Sombre and melancholic but bristling with defiance, the album calls upon a rich depth of experience and mastery to craft six offerings of raw and atmospheric Black Metal that may well have been conjured in a preserved woodland setting far removed from the curses and plagues of modernity that encroach from every side and vantage point. The title track and the ensuing ‘Creed Of Ukko’ immediately dispel any notion of Diaboli relinquishing its well-documented revulsion for the systematic and orchestrated dismantling and desecration of the olden ways.

Preservation of the indigenous heritage and native culture of ‘Northland’ is as vital as ever to Petri, who calls upon the pagan gods to return and wash away the filth borne of centuries of lies and deceit. He switches to the native tongue of his proud ancestral land for ‘Uhrilehdon Viisaus’, ‘Tulen Synty’ and ‘Kouko’, the former a triumphant outburst of northern resolve embellished with keen melodies and folkish acoustic alchemy while the rousing and emotive ‘Tulen Synty’ – with lyrics taken from an 18th-century Finnish poem – entrances then finishes in a flourish of unfettered fury.

Infectious and hypnotic, the malevolent highlight of the album, ‘Kouko’ is graced with malignant and macabre keys and bass lines, its haunting slow-to-mid-paced majesty worming its way into the psyche like some sonic plague from far-off deserts before the freezing and ominous ambience of the poignant instrumental outro, ‘Sacrifice To Gods’, washes through the ether and brings proceedings to a most nourishing and satisfying climax.

Evoking ancient pagan gods, reawakening the primordial wisdom of the North, drawing strength from nature, fighting for heritage, aiming barbs at ‘the hordes of foreign tribes’, Diaboli delivers yet again, proving with this engaging follow-up to the magnificent ‘Awakening of Nordic Storm’ that it remains one of Black Metal’s most enduring and essential entities.