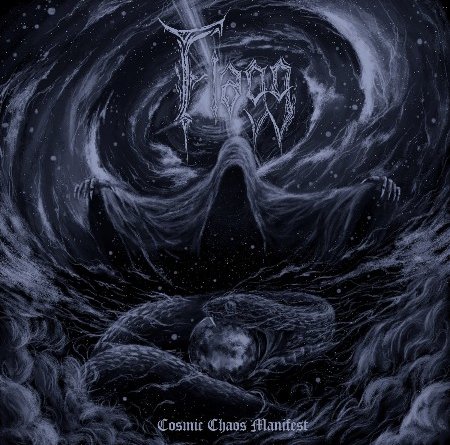 Featuring the combined powers of Tyrant of Malum on vocals and the eponymous Flagg, who plays bass in cult horde Annihilatus, on everything else, Flagg have prepared an eruption of prime Finnish Black Metal on their sophomore full-length, ‘Cosmic Chaos Manifest’ – an album that has exceeded my admittedly-modest expectations (it certainly hasn’t been a stellar year for Black Metal and complete disillusionment looms ever nearer) and gone some way towards restoring my dwindling faith.

A dark energy abounds on ‘Cosmic Chaos Manifest’, from the haunting, archaic opening intro, ‘Invoking the Outer Dark’, through to the swirling, dissonance of the elongated parting maelstrom, ‘To the Coldness Beyond’, and everywhere in between. But Flagg also demonstrate the ability to compose and execute memorable songs, which are cleverly crafted and pregnant with power and passion, the triumphantly-repetitious, blade-wielding ‘Serpent’s Chamber’ being an ideal case in point, followed by the ravenous, scorching tumult of ‘Cross-Ravished Bastard’, which showcases a more feral aspect of Flagg, an entity with many faces, each of them twisted and contorted.

The title track rips through the speakers with the intent of three decades hitherto, a blasting ice-cold furnace of ferocious Black Metal belligerence, but not without charm and awe-striking infectiousness settling in like a plague before expiration. This is pretty much the Flagg way: a band that delivers nothing new but do what they do superbly well. It never sounds like mimicry; more a case of paying homage to the malignancy and storied misanthropy upon which Black Metal was founded. The vocals are ghastly, accompanied by soaring and often-melodious musicianship of the highest calibre, the technicality really coming to the fore on the more pummelling tracks towards the end of the album – ‘Plague Eternal’ and ‘The Fall of Men’.

So the question is: do we need another thoroughly-competent Black Metal act, venturing down a path much travelled to harvest a bounty for consumption that we have feasted upon countless times before? At this moment in time, I believe we do. As there is such a glut of substandard mediocrity being produced right now, it’s refreshing, reassuring and rewarding to chance upon a recording as competent and crushing as ‘Cosmic Chaos Manifest’. Innovators they may not be (mercifully) but there is no denying that Flagg are masters of their chosen crooked craft.