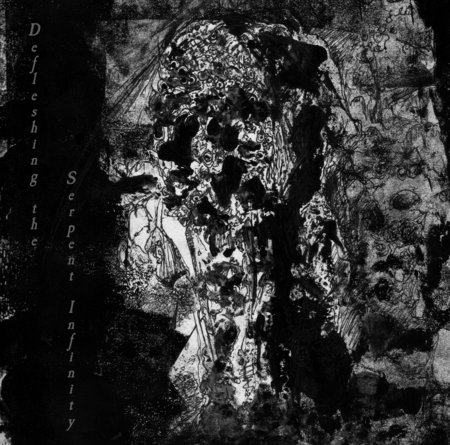 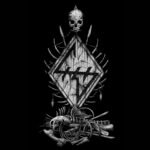 Fleeting it may be but this terrifying alliance between one of New Zealand’s most devastating death cults and Canada’s premier purveyors of tumultuous, chaotic blackness represents an emphatic triumph for quality over quantity. Bringing together two of the most barbaric and aggressive acts on the planet, ‘Defleshing The Serpent Infinity’ is haunting, horrific, ominous and surprisingly varied.

Heresiarch are first up and they open proceedings with two typically monstrous slabs of aggressive, skull-smashing Black / Death: ‘Lupine Epoch’ is a reworked track from their stunning debut full-length, ‘Death Ordinance’, while the deathcrush of their newer composition, ‘Excarnation’, is equally merciless, before a dramatic gear change is effected on the absolutely fantastic ‘No Sanctuary’ – a slow-paced, almost ambient war chant that is arguably even more chilling and unsettling than the uncompromising New Zealanders at full tilt.

New Antediluvian music is always most welcome as – in terms of releases – they have been largely dormant since 2013, when their sensational sophomore LP, ‘λόγος’ was swiftly followed by the brief ‘Septentrional Theophany’ EP. They contributed one song to a split with Witchrist in 2015, then nothing for five years … until now.

Over the course of ten enchanting, unnerving minutes we are reminded what it was that made this utterly intangible act so appealing to begin with – surely one of the most potent Black Metal forces of our time. ‘Slipstream Of Leviathan’s Wake’ is a hypnotic, jarring exhibit of lo-fi, disjointed, disturbing black malevolence, fragmented chaos attempting to materialise but somehow remaining out of reach; echoing unworldly emanations from another dimension conjured in a magickal style that is wholly unique and awesome. A strangely-titled and peculiarly-performed ambient piece (‘Prelude’) complete with creepy Resident Evil-esque piano serves as a fitting denouement to a weird and wonderful collaboration.