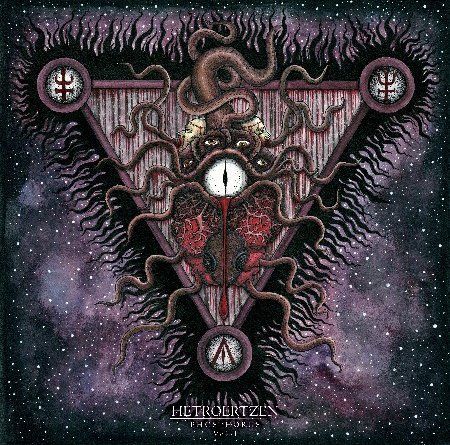 The crypt reopens and the vampires of Hetroertzen re-merge with a profane decade of new perversions, feasting upon the fruit of the serpent and rejecting the scourge of god. Comprising all-consuming invocations of unadulterated darkness, ‘Phosphorus Vol I’ is a downward voyage across unholy, black seas on a spiritual coffin ship adorned with myriad metaphorical mirrors and slithering symbolic serpents, the coven contemptuously stamping upon the crooked cross in adulation of the one true master.

It’s a substantial and ambitious otherworldly consignment of ritualistic, occult art, harrowing, haunting and steeped irredeemably in sheer horror and dread, yet rich in wondrous allegorical prose, offering access to a deeper wisdom and paradoxically uplifting in its ability to transcend obscurity and conjure an atmosphere of doom, from whence will rise the glory of an orgiastic awakening. Eschewing utterly conventional compositional practices, Hetroertzen instead craft labyrinthine psalms with neither chorus nor refrain, each lengthy story a curse unto itself.

There’s close to an hour of dark- and death-worship bountifully dispersed across Hetroertzen’s seventh full-length – and first in five years – with the emphasis very much geared towards creating an insufferable, foreboding, funereal atmosphere as opposed to the deployment of token aggression or hostility. Thus, the tempo fluctuates between mid-pace and sometimes more upbeat moments, with naked rage evident in ‘Absorption of the Current II’ (“We strike where no men strike, When the Spirit has risen, At the silhouette of thy black feathered wings, Announcing the twilight of the fading Lord”), while, in contrast, the predecessing ‘Absorption of the Current I’ shimmers and soars, teasing with soaring melodies and tones.

A notable feature of ‘Phosphorus Vol I’ is that the darkness remains almost impenetrable throughout, with little light allowed to bleed through and illuminate the almost omnipresent bleak nightly canvas. The monochromatic malevolence and malignity is close to overbearing as the transformative work reveals itself, Hetroertzen heralding intrigue and wonder with a spellbinding liturgy of mystical, majestic and unearthly Luciferian Black Metal bewitchery.