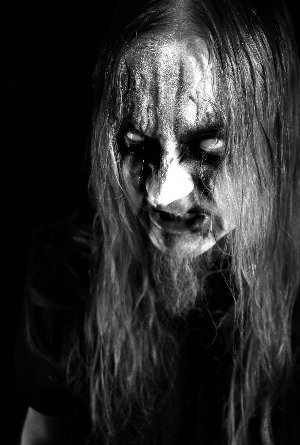 A scorching maelstrom of paradoxically familiar yet fresh Black Metal blasphemy and barbarism bristles with belligerence and contempt across Flagg’s sophomore full-length. Elucidating upon the dark energy that permeates ‘Cosmic Chaos Manifest’, eponymous ringleader and miscreant Flagg discusses his opposition to organised religion; how chaos can devour us all; mapping a liberating path to the serpent’s chamber; and his fond reminiscence of the magical church-burning days of yore. 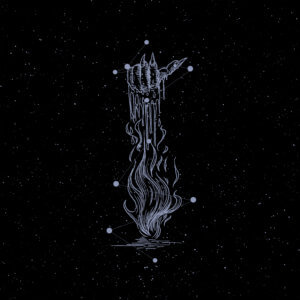 Flagg unapologetically channels defiant, authentic Black Metal the old way, thankfully resisting any urge to deviate from a glorious winning formula. Is your approach to Black Metal along the lines of: if it’s not broken, why fix it? Also, how challenging is it to create timeless music that adheres to the original spirit and aesthetic of ‘nineties Black Metal yet still sounds fresh in 2022?
“I’m not trying to create anything new and complex. I like simple and straightforward, to the point. Of course that depends on the song, sometimes it needs a different kind of approach.
“The music itself comes quite easy for me. I don’t force anything and I don’t try to fit in to something. The feeling and sound in my music is something I like to create and listen to. If that sounds like ‘90s Black Metal, that’s fine. That’s where my roots are.”

While there should be no hard and fast rules, no limits and no boundaries when it comes to creativity, would you agree that there are nevertheless certain elements that need to be in place – both musically and also ideologically and spiritually – in order for a record to be legitimately considered as Black Metal?
“I believe that you shouldn’t limit yourself with any restrictions; go with your own path. As for ‘what is Black Metal?’ I think there should be some musical and ideological reasons behind it, but that is where it’s your choice how to represent that.”

‘Cosmic Chaos Manifest’ seethes with unharnessed hatred for abhorrent mankind and contempt for life – or at least those not worthy of it. The title track implores that we are plunged into darkness and chaos: “Pouring black matter to every living being, Tearing every particle of it all, Turning light into infinite darkness, Until chaos has taken it all”. Meanwhile, ‘Flame of Hate’ and ‘Plague Eternal’ (“Meaningless commotion, Like an insect-swarm, You shall be destroyed, For the abhorrence you are”) are equally hostile towards humanity. As a species, are we beyond redemption?
“I think the human race gets more and more idiotic day by day. Fighting over meaningless things and people getting hurt about things that used to be normal. Life isn’t always nice and comfy and you shouldn’t get offended about every single thing. Humans and governments nowadays limit many things and that narrows our sense of reality. Overall, I think as a species we are doomed. If we don’t destroy ourselves, something else will.”

Agreed. We seem to be on a one-way path towards self-destruction at present, anyway. While, as a species, we have the capacity to annihilate ourselves, is humanity ultimately powerless and impotent within the might of the greater cosmos? In the immense chaos of the infinite cosmic realm, we are born, we live and we die, but beyond that we have little or no control over anything else. Is this one of the themes of ‘Cosmic Chaos Manifest’ and what is the over-riding message or concept of the album as a whole?
“I don’t think we have any meaning or control of the universe in the greater scale. Of course you have the power to think for yourself and have control of your own life here, but I don’t think any of it matters in the cosmic aspect. ‘Cosmic Chaos Manifest’ isn’t exactly a concept album, but there is a recurring theme throughout the songs. Cosmic chaos is a force in the universe that has always been and always will be; it doesn’t care whether you are in it or not.”

Traditionally, Christianity has incurred the wrath of Black Metal and deservedly so. Flagg continues this legacy with fervour. ‘Devil’s Blood’ represents a merciless onslaught against the faithful (“Your cross should be torn apart, Like the whores that follows you by heart” / “No mercy for the soulless sheep, As we force the useless to eternal sleep”), while ‘Cross-Ravished Bastard’ pours scorn on the fraudulent would-be saviour himself: “Negligible creature, Standing on sacred ground, Praying for heaven, You will be annihilated / “You are nothing, Unwanted disease, You are nowhere, Erased and deceased”). Are you not concerned that you might end up in Hell for uttering such blasphemy?
“Since I don’t believe in ‘Hell’, I’ve got nothing to worry about. For as long as I remember I have been against organised religion and Christianity is the main religion in Finland and Europe, so that’s the obvious enemy. I despise most of the things that religions do and that they have to offer. You don’t need religion to have spirituality.” 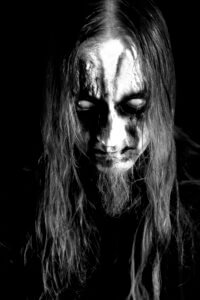 The great farce of Christianity is that not only is it anti-life but it is also an imported belief system that originated in the Middle East and has no relevance whatsoever to the indigenous people of Europe, who for whatever reason are relinquishing their own ancient ancestors, gods and practices in favour of a faraway fraud. Isn’t it embarrassing to witness a region as rich in heritage and history as Scandinavia choose the bearded hustler from Jerusalem over Odin, Thor or Ukko? Would you like to see a renaissance of old pagan, heathen or gnostic customs in Finland, or is Satanism the only way forward?
“Christian crusaders have brought violence and bloodshed all over the world for many centuries, but nowadays Christianity in Finland is basically non-existent. Just a remnant of what it used to be, with still some conservatives trying to hold on. People won’t get slaughtered for their anti-religion beliefs. Of course that’s just for Scandinavia … there are still places in the world where things are very bad because of religion. I think the old religious ways and church and government should be two different things. Also, I don’t see a need for organised religion in the future society, if we even have a future.
“I don’t see Thor or Ukko as the better answer. They are of course our history that was crushed by Christianity. I think nontheistic Satanism or whatever you wanna call it is a better option. Praise your filthy human urges and praise Satan as a freer from your shackles.”

Obviously this lifestyle choice has nothing to do with devil worshipping or sacrificial offerings but is more about indulgence over restraint, celebrating the flesh rather than living like a monk. Living life to the full, essentially. When we are lucky (or unlucky) enough to inherit a physical body, we might as well make the most of it. It’s common sense really. Not much point waiting for an afterlife that isn’t going to happen?
“That’s exactly right. The song ‘Serpents Chamber’ on the album ‘Cosmic Chaos Manifest’ kinda represents just this. The serpent’s chamber is the place within you that you have to find, where you get the strength, lust and wisdom to fully enjoy the ride.”

Although your influences shine through and ‘Cosmic Chaos Manifest’ is an abrasive onslaught of barbarism for the most part, Flagg is not without individuality. The song you just mentioned, ‘Serpent’s Chamber’, perhaps the most unconventional offering of the ten, is almost anthemic, while there are other moments dispersed throughout the record – such as the audible bass, the moody, malevolent midsection of the title track or the triumphant riff towards the end of ‘Flame of Hate’ – where you stray from convention and inject some unique identity into proceedings. How important is it to you to put your own twist on things and weave as much originality as possible into the overall fabric?
“Originality is not important to me, I have my influences and I make things my way from that. If someone likes it that’s great, but first of all I have to stand by it myself. I like hearing bass on the records as well and not just high-pitched screaming guitars. I try to add some atmosphere to the songs with lead guitars and synths when they need it, but overall I wanna keep it simple and straightforward.”

South Korean artist Moon Sang-Ho from Thy Sepulchral Moon and Ordo Cultum Serpentis was responsible for the artwork, which is set within a vast interstellar maelstrom and depicts a giant serpent devouring the earth, under the spell of a dark hooded figure. Can you provide any further insight into the genesis of this image and what it represents?
“He also did the artwork for me on the first record, ‘Nothing but Death’, and I was really happy about that, so it was obvious that he would also do this one. He is a great artist and easy to work with. I wanted a figure that represents the ‘cosmic chaos’, so the main theme in the picture is that. The serpent was his idea and I liked it so we finalised the picture with that. For me, that cover is perfect for the album, chaos rules the universe and can devour you if it wants to. Also, that shows the power behind chaos: nothing will stop it.”

Once upon a time, Black Metal musicians razed churches to the ground, murdered their enemies, took pride in their heritage and didn’t care who they offended as they set about their noble business. Do you long for a return to those glorious days of yore? Do you feel a deep connection with and nostalgia for the genre’s seminal eruption? And, when you are in the mood for listening to Black Metal, do you inevitably gravitate towards the classic bands and recordings?
“I don’t think those days will ever return, nor do they need to. That was then and now is now. Nostalgia is great from time to time, but it’s pointless to live in the past. It is fun to remember the old burnings, etc., since everything is so smoothed out nowadays, with not really many bands that shock in any way.
“I try to listen to as much of the new stuff as I can; finding a great album is always a pleasure. Classic recordings and bands are of course important but I don’t wanna listen to the same thing over and over again, so you need to find something new every once in a while.”

Have you any ambition to perhaps perform some live shows under the Flagg banner? I presume you would need to enlist some live / session musicians, so will this even be feasible or desirable to you?
“We have talked about it with Tyrant and some things are gonna happen in the future but at the moment we have a drummer issue: we don’t have one! So we will see when things move forward.”