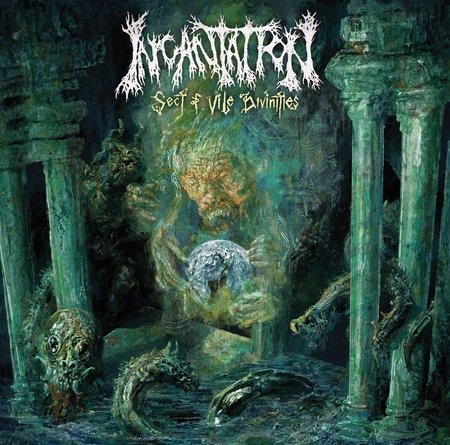 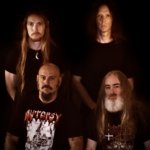 Incantation’s legendary standing in Death Metal is so far-reaching and influential that every release is a major event – not least because these trailblazing death and doom mongers are much closer to the end of their career than the start of it, albeit whilst still firing on all cylinders. ‘Sect Of Vile Divinities’ is Incantation’s twelfth full-length, their iconic debut, ‘Onward To Golgotha’, having been sewer-spawned all of 28 years hitherto.

At this stage, John McEntee could clearly write a totally acceptable Incantation album in his sleep, but is he going through the motions here? Not at all. Obviously, the wheel is not being reinvented – Incantation already did this – and there’s not anything new by Death Metal standards happening on ‘Sect Of Vile Divinities’, but surely we do not want or expect new… Rather, what we have here is a collection of really solid, exceptionally-well-crafted and –executed trademark Incantation-style Death Metal with doom influences.

Twelve tracks in total, which will relieve more than three-quarters-of-an-hour of your daily monotony and drudgery with each listen. Incantation never sound like they are in any hurry to get their message across and the often slow pacing of their music is quite anomalous within their chosen subgenre; something which certainly separates them from their ever-diminishing number of peers (there are more and more Death Metal bands out there but not many who have been on the go this long!).

From the iconic bloodied, broken-teethed gurgles of the mainman himself to the soaring, crunching, emotive guitars and precise, expertly-played rhythm section, Incantation have conjured another varied attack of twisted and sick predominantly slow-mid-paced Death Metal (and a few rippers, too – none more so than the blazing parting shot, ‘Siege Hive‘) corrupted by a swarm of crawling, doom-infested maggots. While it can all of course sound a tad monotonous at times due to the distinctive and monochromatic sound on show, what graces our speakers is nevertheless a very commendable dirty dozen of new songs from one of Death Metal’s classiest acts and, to me, the slower offerings – like ‘Ignis Fatuus’ and in particular ‘Scribes Of The Stygian’ and the long, ominous ‘Unborn Ambrosia’ – are pure Death Metal gold.