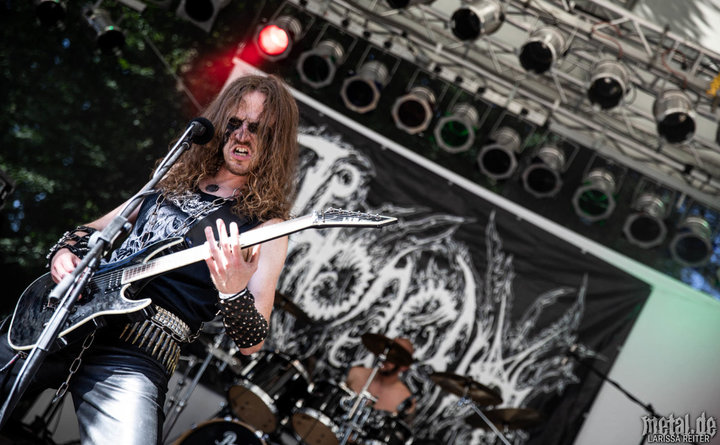 Suitably entranced by the ghastly, death-worshipping new Throneum album, ‘Oh Death… Oh Death… Determinate, Preach and Lead Us Astray…’, I reached out to The Great Executor to discuss death, death and more death. We pondered the power and inevitability of death, how it is arguably the biggest event in all our lives, why the word features in the title of all ten Throneum full-lengths and why death can be rendered meaningless if we lazily, willingly waste our lives away. 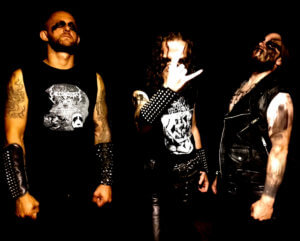 Death is inevitable and irreversible. It can be postponed but never prevented. With such absolute, sovereign dominion, it is undeniably mankind’s most powerful – and honourable – adversary. The cycle of life and death is a fundamental part of the universe and both are equally important, intertwined eternally in the passage of time. Where there is death, there once was life … maybe both should be celebrated?
“The inevitable fact is indeed the inevitability of death. It determines us, but above all, it drives and inspires us. If it had not been for the passage of time, and death waiting at the end, we would not have had any reason to accomplish anything, to try, to develop. Because, if it is not today, then tomorrow or next year… With such a point of view, no evolution or life itself would be possible. We only live because everything had its beginning and has been evolving forever. Fortunately, the arrow of time has only one direction. We owe everything to the passage of time. The cycle of life and death is the foundation of the universe. We should celebrate this cycle, as our ancestors celebrated… Death itself is only a physical transition from one state of energy to another, but we cannot say anything about its mental and spiritual aspect. We can experience it only once (if at all), then there is no return, and the resurrection of the body is just a fantasy made up for the plebs.”

As the final act of every living thing, is death something we should accept rather than fear? Though hard to embrace due to its oftentimes cruel, horrific and abrupt nature, it’s arguably the most momentous event in our lives, surpassing even birth in terms of its all-encompassing might. Joyful as it is, a birth brings no guarantees (except that the new life will one day cease) but death can be neither altered nor disputed…
“For me, the most incredible, yet inexpressible thing is the moment of birth, or life itself, and the way in which Nature ‘arranged’ it all. Whether we are talking about the birth of a star or a human being, this process, so natural, is still elusive to us. We can come up with thousands of definitions of what life is, but we still can’t put into words all its aspects, its multitude and complexity. We have learned to control – at least in theory – the act of conception and pregnancy prevention, but that doesn’t change much when we look at the world not from a human perspective or even not from the earth perspective. Well, what does it matter from a cosmic ‘point of view’? None! Zero!”

Such musings are all of little consolation to the dead person / thing. Being dead probably isn’t much fun. I’d imagine there’s not much of anything going on once you’ve drawn your last breath. Do you think it’s in any way conceivable that we could transcend the material universe and physical laws post-death or are we predestined for nothingness?
“I can’t imagine anything. I enjoy today and I’m trying to live a full life. With reference to the fact that I am fully aware of what time and death are, and that it is to this that we owe our lives, I am grateful to death. I don’t think about it all the time and it doesn’t occupy me at all – I just have a complete awareness of it. While I’m alive I have enough other more fascinating things to do and think about. I accept the Universe and its laws. I’m not afraid of death, but I’m fucking curious. As for the second part of the question, yes I do. But I’m gonna deal with it and experience it when it comes. Right now it would be a waste of time for me.” 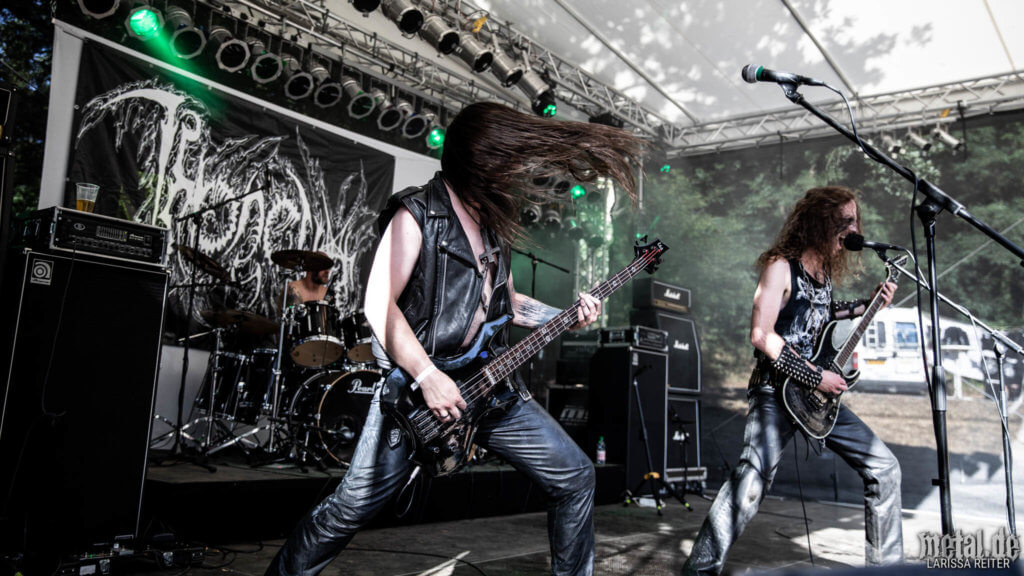 While death demands respect, at the same time it’s hardly an experience to look forward to. But the alternative – eternal life – might be even worse considering the fragility of the human condition and how susceptible we are to pain, suffering and unhappiness… There is so much friction, depression, disease, materialism and inequality in the world that we almost seem incompatible to life. Perhaps death fits us better?
“Naturally, death fits us as well as birth, happiness and unhappiness, health and sickness, etc. We experience everything. What matters most is our attitude towards what happens to us, not what happens.”

Religion doesn’t help the situation. Abrahamic religions are especially guilty of causing people to think and behave in a warped, anti-life manner and effectively wish their lives away. Only 14% of the world’s population claims no religious faith – what’s wrong with the other 86%?…
“The human problem lies elsewhere, namely in laziness. It’s a disease that consumes the community, which causes most people to sit on the couch after work and watch dazzling television instead of doing their own thing. Laziness makes society as a whole stupid and unfulfilled. Politicians are naturally happy with this because stupid masses who can’t even ask questions are easy to manipulate. And religions have been a manipulative instrument of the ruling class since the beginning of time. Besides, the historical and cultural aspect is of great importance here. I once talked to a Catholic about his religion. He wasn’t really able to tell me what he believed, he didn’t even know the Bible. But when I asked him why he thought he was a Catholic if he had no idea about his religion, his response was that this was how he was brought up. And this is where the circle closes. Laziness, ignorance, lack of ambition and desire to seek answers – pure consumerism – that is what the society today is.”

While humans have had an ongoing obsession with death over the centuries and this manifests itself greatly in art and culture – no more so than in Death Metal – death itself is a deeply traumatic, horrific experience for those bereaved (perhaps even more so than for those who have died), so it’s important not to be flippant or complacent about it either. I suppose its awfulness is where the intrigue comes from?
“People who think and are creative – and as such I consider those who deal with art in general, science and other forms of culture – have always been intrigued by the incomprehensible and mysterious. Some people try to explore knowledge about this subject, others see it as a bottomless inspiration. What matters is that we can handle it. Melancholy, panic and fear are attributes of weak, close-minded people.” 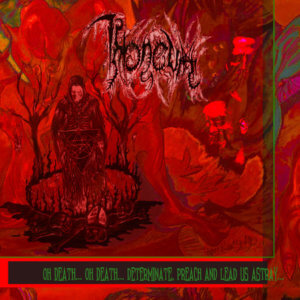 Throneum’s music is Death Metal by name and Death Metal by nature. Death is clearly the prevailing theme right across your discography, going back 20 years. Indeed, I’ve noticed that the word ‘death’ features in all ten Throneum album titles. And it’s mentioned twice in the new one: ‘Oh Death… Oh Death… Determinate, Preach and Lead Us Astray…’. No let-up in sight, then. Is this album title an invocation / invitation? What do you mean by ‘lead us astray’?
“This album is definitely a challenge, especially from the musical side. Next year we celebrate our 25th anniversary. Years ago, inspired by ‘We Are Death… Fukk You’ by Sadistik Exekution, we decided to use the word ‘Death’ in every title of the full-length albums of Throneum – first of all because we played Death Metal and secondly we were very orthodox about it and the metal underground in general. My point of view has been evaluated, a lot has changed, but we still play fucking Death Metal, and as long as we record full time albums, the word ‘Death’ will appear in their titles.  Doesn’t death lead astray? Especially those who forget about her and instead of enjoying life and its charms are focused only on the consumption of goods and mass products.”

It’s a ghastly and harrowing record, with a surprisingly rich and diverse range of soundscapes. As well as being raw, morbid and ugly – terms that are usually used to describe Black Metal rather than Death Metal – you have incorporated a variety of eerie and, dare I say it, almost experimental elements. Why is this unorthodox approach so appealing to you and how does it tie in with delivering your message?
“I play the music I want to listen to, which naturally comes out of me. We have never imposed any framework or assumption on ourselves, we have always been honest with ourselves. This is the most important thing to me. You can call this music art or just noise, actually both, I do not care because it’s only the relative notions. All that matters to me is personal, spiritual and creative freedom. And because I listen to a lot of different genres of music – from the psychedelics of the ‘60s to grindcore – you can hear it in my music. It’s a natural process.”

The song ‘Delta:self-appointed-grandeur’ is particularly unusual. It sounds like voices are being channelled from beyond the grave in a séance or through some fracture between the spirit world and the physical realm. Is this the effect you were seeking? Were you apprehensive about including such a strange and haunting track on the album or do you relish exercising complete artistic expression / control and essentially doing as you please?
“That’s a really nice way of putting it. Like I said, what matters to me is freedom and a lack of any kind of embarrassment. I’m not looking for anything anymore. Years ago, I found my path, which I walk constantly, and which allows me to break away every day and every night again and again with the same fascination and delight. Artistic expression, as you have rightly said, is exactly how my music should be received.”

Due to the pandemic, mankind has been contemplating death more than ever recently. In the panic, all of us have been forced to confront our mortality and to consider the possibility that we could be struck down sooner than expected. Amid the ensuing contemplation and introspection, it struck me that death can be rendered meaningless if we have wasted our lives away. Death will have the last laugh, but is it important to get your revenge in first by living a fulfilled life … or it is all ultimately a waste of time?
“Why would she laugh? Death is just the name of the process of dying, physical change. But it’s the one that makes our lives beautiful and fascinating, and we should actually be grateful to her – ‘Oh Death… Oh Death… Determinate, Preach and Lead Us Astray…’!!!”