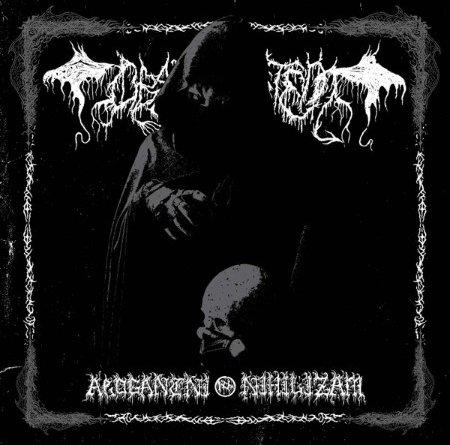 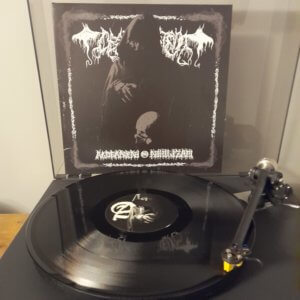 In these inane times of instant gratification and ever-diminishing attention spans, where the masses of docile human cattle are too lazy to even think – but prefer to let their ‘smart’ devices dictate to them what they should do, believe and enjoy – how many are prepared to give up 70 minutes of their time to check out a demented raw Black Metal album from the far-flung musical outpost of Bosnia and Herzegovina? Not too many, I would venture. Easier to let Alexa pull a playlist from her cybersnatch and fill your ears with vanilla sonic shit than to invest in then sit down with an obscure work of analog art. Fuck the sheep … their loss as usual because ‘Arogantni nihilizam’, the third full-length from Obskuritatem, really is something very special.

Although lone Sarajevan wolf O is associated with most of the bands that make up this cursed collective, Obskuritatem is very much the bedrock of the Black Plague Circle and has been releasing raw Black Metal terrorism of the most depraved strain for a decade and more already. While previous full-lengths ‘U kraljevstvu mrtvih…’ and ‘Hronika iz mraka’ are exceptional works in their own right, ‘Arogantni nihilizam’ probably tops both of them for a variety of reasons. Over nine minutes long, the title track kicks off proceedings in a maelstrom of noisy, grim BM fury and disturbing ambience that calls to mind the ugliness and majesty of prime Leviathan more so than Black Cilice, etc. Obskuritatem remains entrenched in the rawest terrain of the underground, alongside its peers from the Black Plague Circle and its erstwhile Portuguese equivalent, the Black Circle, but the subtle sophistication and nuance glimmering like a black blade in the night on these songs takes things to another level.

The musicianship is stellar and O showcases hereon a tremendous knack for crafting memorable songs, with a diversity of strokes manifesting on the final scorched canvas of this intoxicated tapestry. With two lengthy offerings on each side, the first record in the double vinyl edition is superb, worthy of the price of entry alone. The production is surprisingly clear for a raw BM album and the sound of the LPs is fantastic, allowing all the grime to shine through. Another masterful invocation from the underworld, ‘(De)generacija propasti’ closes out Side B and leaves one longing for more. True to form, at the outset of Side C, the wondrous ‘Vijore se zastave srama’ – possibly the highlight amid many highlights – delivers in spades.

And so this extensive, exhaustive album continues, seething with raging Black Metal mania and madness, engaging for a full hour and ten minutes – but have you got the stamina? Can you put your fucking phone down long enough to listen properly? Uninterrupted? Turn out the lights. Light a candle or something. Fuck the new world order and the old one. Inhale a deadly dose of timeless misanthropy. Though enjoyable, the Mütiilation and Nargaroth covers (‘Destroy Your Life for Satan’ and ‘Possessed by Black Fucking Metal’ respectively) don’t necessarily add anything but do give a little more insight into the single-mindedness and unorthodoxy of the force behind Obskuritatem. Be it a demo, rehearsal, split or album, he’ll do what he wants and that’s refreshing. Inspirational stuff this and worth putting some time into. Liner notes on the insert are good, too. Fuck the nowadays Black Metal scene, indeed.