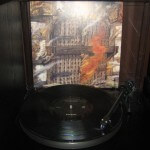 There’s some impressive raucous and fierce Black Metal contained on ‘RH-13’ but I’m not sure it quite lives up to the hype that’s been generated (albeit within the tiniest of habitats, to be fair) by the obscure, underground, deliberately-hard-to-acquire series of Rhinocervs releases.

While I’m obviously pleased that this recording has been reissued on vinyl (and remastered to boot), it has to be said that the mere 25 minutes of music included does not justify the requisite substantial outlay of cold, hard cash that was needed to gain admission to the party from Europe. Of course, I knew this before purchasing and was still prepared to proceed, which suggests that either I am in a bad mood today and over-protesting or generally have more money than sense.

Bear in mind that only individuals who worship underground Black Metal and all things cult are ever likely to become exposed to Rhinocervs cassettes / records and, therefore, the ‘RH-’ series will as a consequence receive a very high percentage of fawning appraisals (from a small pool of people).

Pretty much everyone who hears this is going to hail it as supreme but the reality is that – apart from the fourth track – ‘RH-13’ (which, looks amazing, by the way) is somewhat underwhelming and certainly disappointing considering that the masterminds behind Odz Manouk and Tukaaria have collaborated to conceive and nurture it.

Having said all of that, if I didn’t have it, I’d buy it again, so perhaps certain things in life are just mandatory by their very nature…