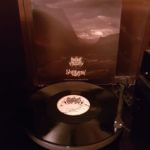 On ‘A Monument To The Abyss Of Death’ each band spews forth one epic dirge of supreme underground Death Metal, totalling almost half an hour.

With their first stirring since the stunning self-titled debut full-length, Sempiternal Dusk contributes the immense ‘A Salacious Desire For Nothingness’, recorded in 2015/16, while Encoffination’s decrepit, putrefied decomposition, ‘Cemetery Of Earth’, laid down in 2015, represents their first recording since ‘III: Hear Me, O’ Death (Sing Thou Wretched Choirs’.

Two bands I love (to death) so this split was a funereal no-brainer. Lower the casket and cover it in clay. All things must end.