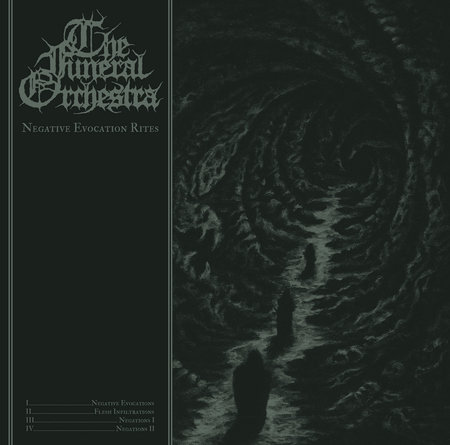 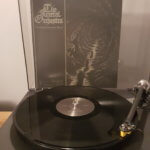 From the darkest of places, The Funeral Orchestra have crafted a soul-destroying album that is crushingly oppressive and unbearably bleak. A staggering 17 years on from their iconic, epic debut full-length, ‘Feeding The Abyss’ (things do tend to move slowly in the weird and wonderful world of funeral doom…), the priests of impending death and doom have returned with four harrowing, decadent dirges on the aptly-titled ‘Negative Evocation Rites’ – the sonic embodiment of an occult death-reverence ritual performed by demons not men.

While Death Metal and Black Metal rely predominantly on aggression and dissonance to make their impact on the senses, infinitely-more-restrained funeral doom adopts a different approach entirely, sluggishly and painstakingly dragging the listener downwards and invoking a similar response through a tortured, often repetitive (and therefore relentless) methodology. In many ways, it’s deconstructed Death Metal, overwhelming the senses with cold negativity, each riff lingering long in the ether to remind us of the steady, irreversible passage of time and how we will all bow down to death.

Although the power of funeral doom has always captured my imagination and impressed me, I must admit that generally speaking I do often find it to be too melodic and lush and therefore lacking the levels of menace that would make it genuinely unhinging. However, I feel that The Funeral Orchestra are perhaps darker and more unnerving, more abysmal than the majority of their counterparts.

There are no niceties on ‘Negative Evocation Rites’. The tone reeks of omnipresent death and decay from start to finish; this is a celebration / acknowledgement of the fragility of existence and a timely reminder that each person is a soon-to-be corpse. Creepy and chilling, the album is essentially a 42-minute ceremonial death rite that brings to mind the greats of the subgenre but is closer spiritually to Encoffination, Catacombs or Nortt and all the better for it.

(Note: obviously this is not Death Metal technically speaking but my site is configured in such a way that I have to assign each review to a category and Death Metal Reviews is the closest fit.)