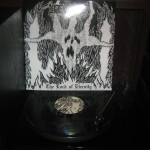 Sickeningly, there is an increasing number of so-called Black Metal bands who seem to place more emphasis on being the next big thing than being dark and black. Black Metal is not a place for Yngwie Malmsteen wannabe motherfuckers. Thankfully, there are still a select few artists who just don’t give a shit about melodies, production or technicality. Or anything.

As one of the hordes that comprise Portugal’s seething Black Circle movement, Vetala is as coarse and rough and raw and ready-made as they come. Cavernous, dungeon Black Metal that was vomited forth onto tape by a bunch of crazed fuckers who are interested in only one thing: filth. Plague and pestilence and piss abound in a pitiful racket on the unbelievably-inaccessible ‘The Lord Of Eternity’.

This album is an uncompromising, crude shitfest that follows no rules but Vetala’s. It’s a pure, demented, chaotic mess from start to finish, to be honest, and I’m really not sure why I enjoy listening to such insanity. Glorious crap.