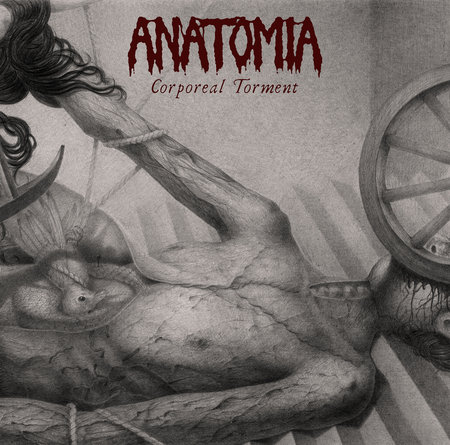 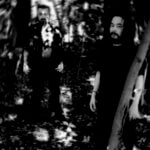 The sonic embodiment of a slow, tortuous death, Japan’s premier overlords of death and doom return with a truly devastating fourth full-length which extinguishes all hope over the course of 43 majestically-mangled minutes. In keeping with their standing as one of extreme music’s most compelling and unique entities, Anatomia deliver a masterpiece of morbid, subterranean Death Metal on ‘Corporeal Torment’ – a harrowing, horrific and wholesome descent into the abyss of nothingness that awaits us all.  True to form, Takashi and Jun take their time for the most part … death is most effective when you drag it out a little.

‘Dismemberment’ begins in a concentrated torrent of rage and fury, the sound of mutilation never so sweet – a gross, macabre, sick and twisted paean to grizzly grotesquery, Anatomia once more demonstrating an innate understanding of dynamic, the use of shading and pace changes to conjure just the right atmosphere. In this respect, they are pretty much out on their own, their music akin to a soundtrack to the most disturbing horror movie (life itself?).

‘Slime Of Putrescense’ emerges from ominous origins, spreading like a contagion to ooze and seep through the speakers, putrid and pungent, the crawling pace an ideal accompaniment to such an odious outburst. There’s barbarity, too; an eruption of bile and energy interjects as proceedings become more frenzied, the second track ending in a cascade of foul and unsettling ambience.

‘Despaired Void’ is a haunting, forlorn lament which perfectly encapsulates the cold pointlessness of everything, death lurking at every turn, on every shoulder – the inevitable end sure to punctuate every hapless journey through fleeting existence. One can sense the void of nothingness awaiting every living thing, can feel its presence, although who’s to say we are not already in this void? Again, Anatomia’s uncanny ability to conjure and channel precisely the desired mood and tone is nothing short of remarkable – composition and execution of the highest calibre!

After the first three offerings on ‘Corporeal Torment’ grant an enlightening insight into these Japanese fiends at their mesmerising best, bear witness to the utterly nightmarish, blood-curdling, deeply-disturbing 21-minute ‘Mortem’, which closes the album on the most nauseating high. On this epic slab of necromancy, the masters of misery and decay render death, doom, despair and hopelessness tangible, ‘Mortem’ an exercise in abject, wretched desolation, blocking out all light, heralding eternal darkness as life ends slowly but surely and nothing remains only darkness.

With its dizzying resonances, the crude and rancid ‘Mortem’ provides a fitting denouement to another extraordinary vision from the warped minds of Anatomia, the prolific duo (just count all those split releases they contribute to between albums!) who stormed the morgue on their previous two outstanding full-lengths, ‘Decaying In Obscurity’ and ‘Cranial Obsession’, and have hereby confirmed their status as peerless purveyors of slow, crawling, atmospheric death and doom. Abandon hope all ye who enter here…