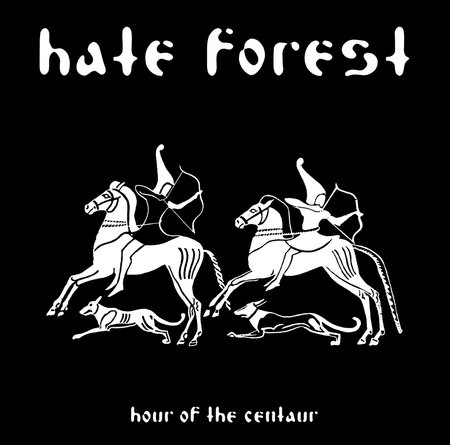 Just like that, when least expected, Hate Forest returns from the dead. After 16 years of silence, I assumed this iconic entity was no more and the arrival of the magnificent debut Precambrian album earlier this year seemed to draw a line under things for once and for all. However, we should never assume anything in the weird and wonderful world of Roman Saenko, where silence speaks more loudly than words ever could. Thus, ‘Hour Of The Centaur’ is a surprise that probably shouldn’t really be that surprising.

The old magic that made Hate Forest such a mandatory, trailblazing force in the late ‘nineties and early ‘noughties is still very much intact. This album was created in a matter of days and is packed full of power, passion, energy, hatred and contempt. From the mercurial moment ‘Those Who Worship The Sun Bring The Night’ erupts disdainfully through the speakers we are transported back to those glorious days of Supernal Records’ guiding influence, when Ukrainian Black Metal was almost all that mattered.

We are provided with 38 minutes of savage, raw, primal Black Metal art, blasting and fizzing scornfully through the ether, no filler or attempt at atmospherics to soften the blow. While Hate Forest have of course ventured successfully into more atmospheric realms in the past – perhaps most evidently on the outstanding third full-length, ‘Battlefields’ – there is nothing of that nature to be experienced on ‘Hour Of The Centaur’, which is a direct attack, a ferocious onslaught aimed at “modern pseudo-intellectual, selfie / Instagram Black Metal”.

There is no real purpose to reviewing this album, apart from letting people know it exists. If you are familiar with Hate Forest already, then you know this is an essential purchase. If you haven’t previously experienced the legendary sounds emanating from the old Eastern Front, then now is the time to start. A welcome return from one of the most essential bands in Black Metal history at the end of a truly terrible year. Buy the LP and you get a bonus 7″…