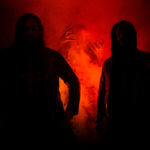 With swarming, virulent, ominous intent, the opening pact ‘Gods Await Us’ rages forth manically to signal the cursed return of Lvcifyre, some seven years on from monumental second full-length ‘Svn Eater’. As a gloriously decadent journey unfolds thereafter, it quickly becomes evident that ‘The Broken Seal’ is worth the wait, delivering three-quarters-of-an-hour of ghastly, abominable blackened Death Metal grandeur.

The second offering, ‘Tribe Of Khem’, provides a perfect illustration of the power and scope of Lvcifyre, packing more punch and dissonant sonic chaos into three minutes or so than many produce across an entire discography. This is a devastating dose of organic yet diverse music with the majesty of Nile, the memorability of Behemoth in their long-gone prime and the might of Portal.

The riffing on ‘The Broken Seal’ is malignant and truly depraved (Lvcifyre even have a penchant for nasty-sounding and somewhat dread-filled solos); the drumming pummelling, unremitting,  particular and precise; the varied but invariably evil vocals diabolical and demonic in equal doses. Once more, inimitable Cultes Des Ghoules frontman Mark of the Devil (T. Kaos’s acolyte in both Death Like Mass and Sodality) contributes substantial guest vocals, which enhance further an already exceptional recording.

The Lvcifyre sound is distinctly claustrophobic and suffocating, with even the skilful deployment of brief ambient passages doing little to offer respite from the wickedness, instead heightening the sense of impending doom. Located at the heart of the album, the ambitious and stupendous title track invites the listener on a journey through a bountiful labyrinth of pitch darkness – a beguiling, tormented hybrid of the basest aspects of Death Metal and Black Metal, again with variety, dynamism and subtle gear and mood changes that many bands could only dream of.

However, it’s as a heaving, harrowing whole that ‘The Broken Seal’ should be digested in order to be fully appreciated. Each intense incantation has been painstakingly crafted and polished, with ample space allocated within the seething maelstrom to every instrument and utterance, but the meticulous placement of each note is amplified on a more macro level by the thought that clearly went into the overall flow of the album. Everything just feels like it’s in its rightful place, like on a classic record where you can’t imagine the songs appearing in any other order.

Thus, a seamless flood of ordered, controlled, militantly-harnessed chaos washes through the speakers, enveloping us in an almost tangible, ancient darkness. While paying worthy homage to many of their more obvious influences, there can be no denying that Lvcifyre bring something unique to the altar of madness with their cruel and haunting third full-length, the manic, multifaceted, possessed and utterly unhinged final spell, ‘Black Mass’, providing a fitting climax to a modern masterpiece of measured malevolence.