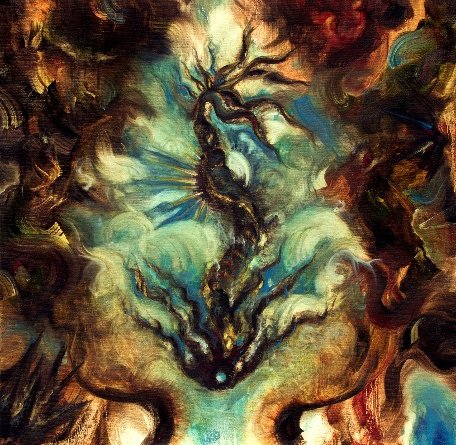 From the very same territory that gave birth to the obliterating might of Altarage roars forth another irresistible anonymous force, Pestilength, with terrifying second full-length, ‘Basom Gryphos’. Do these uncompromising, explosive Basque County hordes share members? I don’t know but I’m prepared to at least entertain the idea, judging by the obvious similarities between the acts, both musically and thematically. It doesn’t matter, of course.

The fact that none other than The Curator from Portal contributes lyrics to the fifth incantation, ‘Tephra Codex’, presents a very accurate indication of the strain of otherworldly chaos evoked across ‘Basom Gryphos’ – a teeming maelstrom of tortured, frenzied, unforgiving carnage. Perhaps with some Dead Congregation injected into the Altarage-Portal DNA, the intensity is always close to breaking point as strangulated vocals rasp in protestation while ravenous, vicious riffs emanating from the void itself cut to the bone, shedding blood, rending flesh, invoking nothingness.

Concise, ritualistic percussion beats a demented tattoo of deconstruction across the music. The drumming almost seems to have a life of its own at times and this affords the album a degree of dangerous spontaneity to perfectly complement the cold and calculated strings and roars. There’s some subtle experimentation sewn here and there but mostly ‘Basom Gryphos’ is an invigorating, anguished, agonised expression of harsh barbarity.