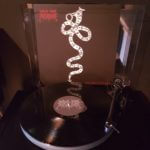 For over a decade, Ride For Revenge has been delivering filthy, primal Black Metal of the highest calibre upon the unworthy, ugly masses.

Over the course of six full lengths and a veritable slew of splits and compilations, the unique Finnish cult has been responsible for some of the most original, eerie-sounding and downright disgusting depravity to make its way into my ear canals.

Each release has been magnificent but I don’t think anything can compare to the jolt that accompanied the debut full-length, ‘The King Of Snakes’, which paved the way for the decay that would follow.