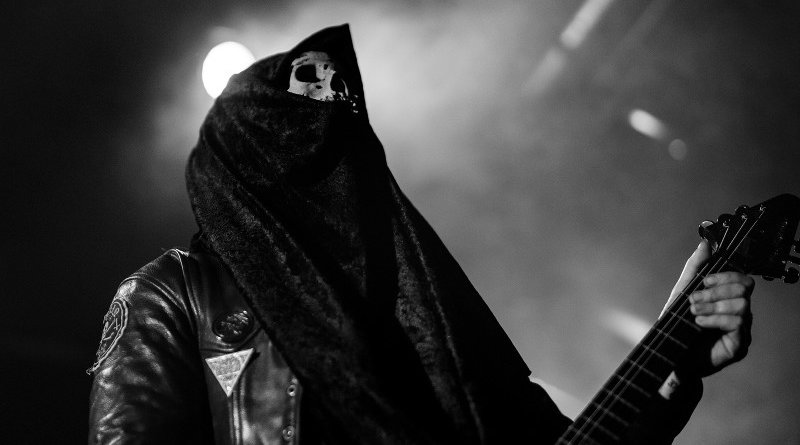 Celebrating and evoking the inevitable fate that awaits us all, Ritual Death’s deliriously-decadent and predictably-self-titled debut full-length reeks of necromancy and is charged with an all-consuming reverence for death. Projecting a primitive and singularly macabre persona, creator-in-chief Wraath – he also of Darvaza, Fides Inversa, Behexen, Mare and Dark Sonority infamy – appears to be embarking on a particularly-personal journey on ‘Ritual Death’. The tireless Trondheim audio terrorist took time out from his servitude to Satan to contemplate death worship; dedication to darkness; the practicality of performing live rituals behind an intrusive human-skull facepiece; and making the most of our limited time in this earthly realm before retreating to the silence of the tomb. 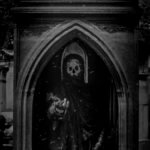 Channelling the darkest of death in the name of Satan, Ritual Death is the most fitting band name in the history of Black / Death Metal. Would it be accurate to describe the aptly self-titled and utterly abhorrent debut full-length as a celebration of the might and dominion of death in all its (inevitable and infinite) glory?
“Yes, but it also deals with utter madness, hate, terror, magic and Devil worship.”

‘Transformation, liberation…’ Does death mark the end of every journey, the beginning of something new, or is it a sort of homecoming (‘As the forest whispers my name, she puts her pale white arms around me and guides me home’)?
“In my opinion, we don’t know, but everyone will find out.”

“I am the lord of the grave, the only god that always saves” / “Live life to the fullest and prepare to follow me”. Does death provide Satan with the ultimate victory over all living things? While we have flesh on our bones, should we revel in it and waste no time?
“Memento Mori. Get busy living as the end is coming fast. Maybe it is not as much about worshipping Satan but becoming a Satan. Therefore, do not stand still and just simply exist and dry-rot. Burn bright, become ashes, not dust; use your time.” 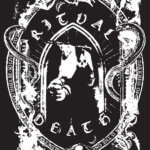 Your name is synonymous with an ever-expanding legion of distinguished hordes. While every band you participate in naturally receives your full, undivided attention and focus, does Ritual Death hold a special place in your blackened heart? Is it a project that you are especially immersed in on a personal level?
“Everything I choose to involve myself in will have a special place in my heart. If I involve myself in something, it means it has triggered something and then I will give it my all.
“But, of course, Ritual Death is a bit closer as I make a lot of the music and most of the lyrics. Then again, I might just be a channel that the force known as Ritual Death has chosen to speak through.”

Do you compose the songs and lyrics yourself or is it a collaborative effort involving some or all the band members? How important are the individual contributions of each musician to conjuring the unique and otherworldly Ritual Death sound?
“With the music, the basic idea is created at home, either by me or Nosophoros [drums] and we then work on it in the rehearsal crypt. The lyrics are written by me or him or some well-respected friend / brother, who contributes when asked.”

Where does your fascination with death stem from? Does your love of Death Metal (very evident in Ritual Death…) and Black Metal feed this obsession?
“I have no idea … been asking myself this. When I was younger, I feared death very much. I even remember drawing it at school at an early age and saying it was my fear. No idea when that switched into what it is now…
“I guess finding Black / Death Metal triggered it even more. Like a strike of lightning, it awakened and opened something in me.” 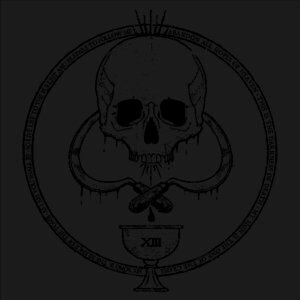 Ritual Death is both a sonic and visual treat to the senses. Symbolically, the skull is central to your visual presentation, featuring prominently on the cover of all your releases to date (alongside a chalice and scythes) and also taking centre stage in your live ceremonies. The human skull is the quintessence of death, decay and mortality and is also strongly associated with the dark arts and in particular Death / Black Metal. Is this why you chose it as the permanent symbol of Ritual Death?
“You are on point there. It symbolises everything Ritual Death is.”

It’s no secret that you revel and excel within the charged, possessed environment of live rituals, where you are a force of nature. How important are live ceremonies to the overall Ritual Death experience and how much are you looking forward to bringing some ceremonial crypt desecration to stages across Europe alongside Misþyrming, Kringa and Nubivagant in early 2023?
“I am not sure how important it is. For me, it is a very strange place to be in that mask and also not being able to move much, with limited sight when using that. It is a challenge from both a physical and mental point of view. So I am still asking myself if it is worth it. Time will tell.
“But very much looking forward to rampaging across Europe with these fine gentlemen, as they are great human beings and supreme bands.”

You have been channelling death and darkness in His name for over two decades. Cursed, Scarred and Forever Possessed! Current obligations comprise Darvaza, Behexen, Beyond Man, Fides Inversa, Mare and Dark Sonority as well as Ritual Death and countless other live / guest musician or vocalist collaborations. Where do you get the seemingly-bottomless reserves of motivation, energy and enthusiasm from to contribute so meaningfully to so many great projects? Is it more than a labour of love? A vocation? Have you been chosen to do this work?
“I have no other choice: if I don’t do it, I go mad. But I have also made a choice to engulf myself in this and made the conscious choice to withdraw myself from the hope, dreams and expectations of the ‘normal’ world. And that gives me time. Then, combine that with me being fortunate enough to know all these highly talented and smart people that follow much of the same path, it is my obligation to make the most out of the art they want me to contribute on. It is definitely a calling.
“My life is the ceremony and I am the sacrifice upon the altar.”

Live photo courtesy of Jarle H. Moe / Beyond The Gates