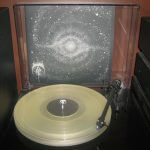 The Dimensional Nomads gig was awesome and, on the flight home, I started to think about how amazing this collective of musicians is – Svartidauði, Sinmara, Slidhr, Wormlust, Myrkr, Rebirth Of Nefast, Haud Mundus – and how interlinked they are. Such a convergence of incredible Black Metal.

I had forgotten all about the Almyrkvi MLP, ‘Pupil Of The Searing Maelstrom’, which is actually the work of Garðar alone. The record is 26 minutes long and it’s something of a curveball as it sounds more like Blut Aus Nord than any of the aforementioned hordes. But – predictably – it is astonishingly good and showcases the versatility and sheer excellence of one of Black Metal’s most potent (and dead on) forces right now.