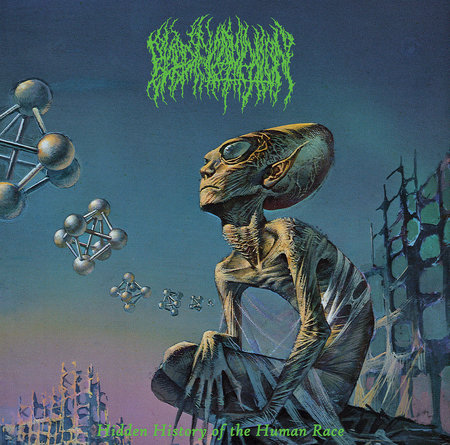 Brilliantly composed, arranged and executed, this analogue-recorded 36-minute album comprises just four tracks, Side B taken up entirely by the 18-minute epic ‘Awakening From The Dream Of Existence To The Multidimensional Nature Of Our Reality (Mirror Of The Soul)’, a complex and multifaceted journey full of twists, turns and unexpected moments, including a Pink Floyd-ish denouement. It’s as enjoyable as it is unpredictable.

Very noticeable throughout is the crystal clear mix and production that allows the Death Metal gymnastics of Blood Incantation to flow through your speakers in glorious splendour, the riffs, the moshing melodies, the seemingly-haphazard drumming, deep growls from the most distant point of outer space, everything present and correct.

With the world in turmoil, this record has never seemed more pertinent. The lyrics are thought-provoking and – dealing with topics such as astral physics, the cosmos, the origins of mankind and human-alien connections (are we descended from extra-terrestrials?) – certainly on the cerebral, philosophical side. It’s an interesting theme that fits the music and artwork perfectly, rendering ‘Hidden History Of The Human Race’ an unusual album and one to cherish.

For once, the hype is more than justified.