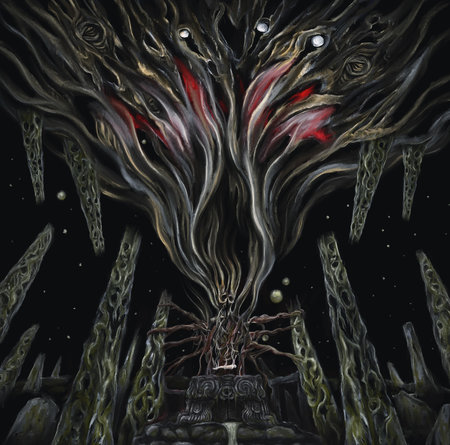 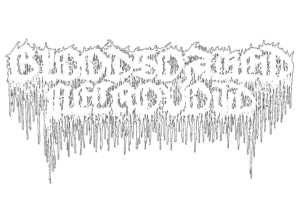 Costa Rica’s cosmic conspirators Bloodsoaked Necrovoid demonstrated their unnerving, uncanny ability to conjure the most disturbing abyssal blackened Death / Doom on their 2018 demos (collated last year on the excellent ‘The Apocryphal Paths Of The Ancient 8th Vitriolic Transcendence’ compilation LP). The quality of their earliest material was such that I was braced for a pretty exceptional debut full-length. However, even allowing for those high expectations, ‘Expelled Into The Unknown Depths Of The Unfathomable’ has still knocked me for six.

In slow motion, a sidereal horror unfolds ominously, Bloodsoaked Necrovoid’s monolithic, claustrophobic shape-shifting, inexplicable emissions reverberating through time and space, the skilful manipulation of tone and pace adding to the sense of paralysed wonder at the fate befalling us in this warped surreality. The atmosphere conjured across the six lengthy premonitions is immense in every conceivable way, each terrifying, distant, growl instilling dread and unease, the riffs cutting across the aeons like sharpened, icy comets while the varied, dynamic and annihilating drums simply crush the soul, providing the final nails in the coffin, so to speak.

While the pace does shift regularly, even within songs, Bloodsoaked Necrovoid rely predominantly on a sick and twisted slow, subdued Death Metal delivery that’s at times not too far off Doom, close to Coffins, Anatomia, Spectral Voice or Encoffination in feel, but fluctuating from slow-mid pace and then back again. The music is as eerie as it is embryonic, its primitive nature something of a paradox considering how cleanly every strike hits home, the rich and wholly organic production ensuring maximum impact.

As the album title suggests, Bloodsoaked Necrovoid also have a penchant for complex, labyrinthine song titles, which add to the mystique. From the harrowing opening strains, cymbal crashes and bellows of ‘Dispossessed In An Asphyxiating Endless Darkness’ through to the parting harbinger, ‘Traversing The Threshold Of A Treacherous Depraved Absolute’, each song is delightfully named, with the ability to imprint dark, disturbing images in the mind without even delving into the lyrics.

‘Perverted Astral Intoxication For A Death Incarnation’ and ‘Existential Dismemberment By A Transcendental Nothingness’ are two particular personal favourites, hinting at the surrender to innate emptiness, spiritual nihilism and futile pointlessness that Bloodsoaked Necrovoid are channelling through their art – the unapologising antithesis of uplifting music and all the more refreshing for it.