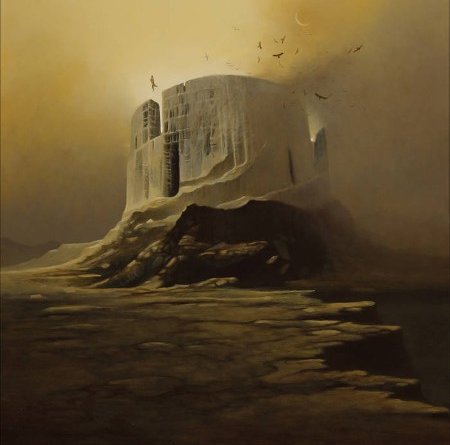 In these characterless, vanilla times of repetitive, weak, monotonous cultural tedium, it has become painfully difficult to find artists of true merit. Specifically, what I’m referring to is bands who exist outside the quagmire and dare to do something unique without compromising on quality, aggression and authenticity. Zoroastrian Death Music manipulators Dakhma broke the mould when announcing their arrival with enchanting demo, ‘Passageways to Daena (The Concomitant Blessings of Putrescing Impurity)’, seven years ago and have continued defiantly, steadfastly down an otherwise untraveled path since then.

Dakhma successfully put their own twist on blackened Death Metal. While their latest full-length, ‘Blessings of Amurdad’, summons the esoteric might of Nile and the occult fervour of Necros Christos and arguably contains traces of everything from Teitanblood to Bølzer, Dakhma is a law unto itself and cannot be easily pigeonholed or described. Apart from maybe Ride For Revenge, how many other current bands can we say that about? Of course, ploughing one’s own furrow would be futile if the music was mediocre … a potential pitfall that Karapan Darvish – the mastermind behind this entity and a host of others comprising the extended Helvetic Underground Committee – avoids with devastating aplomb.

Totally unhyped and understated, Dakhma fell silence for a few years after delivering their frankly astonishing debut album, ‘Hamkar Atonement’, in 2018. In the dying embers of last year, without warning, they returned unexpectedly with the equally-accomplished follow-up, ‘Blessings of Amurdad’, offering forth 52 minutes of wondrous, ritualistic, sand-covered Death Metal magnificence, striking a perfect balance between intensity and catchiness. While the album is fierce and ferocious, it is also uncannily infectious as a result of incredibly skilful composition and execution.

The Middle Eastern influences, which are always evident but somehow never overstated, lend the music a noble and powerful quality and the production is immaculate, allowing everything to erupt and detonate explosively and clearly whilst retaining the underground legitimacy that is so important to Death Metal. Thematically and lyrically, ‘Blessings of Amurdad’ carries the listener back through the centuries to ancient Persia, predominantly drawing upon passages from Zarathushtra’s 17 Avestan hymns found in The Gathas to explore the paradoxical relationship between mortality and immortality – i.e., the inevitable conflicts between mortals and the divine – in Zoroastrianism.

It’s a rich and mesmerising work but also a thunderous declaration. Each of the eight incantations is superb in its own right and they all flow together elegantly to create a whole that is greater than the sum of the individual components. Simply put, ‘Blessings of Amurdad’ is a distinctive and stellar volume of work more than worthy of anybody’s time. And the fact that it flies boldly so far beneath the radar makes it all the more appealing.