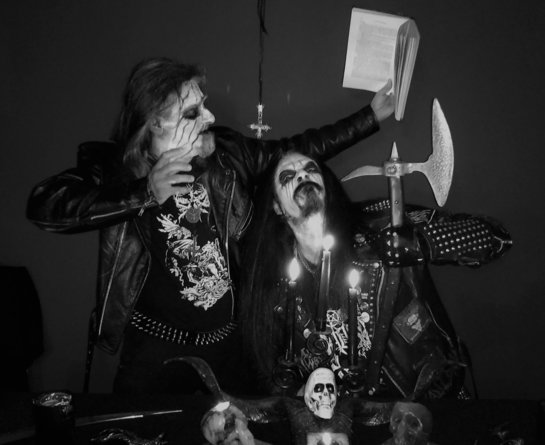 If SAD’s superb seventh full-length, ‘Misty Breath Of Ancient Forests’, proves anything it’s that the dedicated Greek duo have no intention of reining in their total devotion to grim, nihilistic, antichristian Black Metal. For a decade-and-a-half, these uncompromising underground stalwarts have consistently conjured unswerving misanthropic art of the highest calibre, honouring Black Metal’s deeply-entrenched roots, ignoring trends and steering clear of online self-promotional whoring. I spoke to Ungod and Nadir about resilience, self loathing, what it means to be human, mankind’s irrational fear of death and the importance of securing small victories. 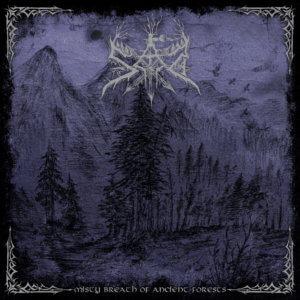 The first song on your new full-length, ‘Misty Breath Of Ancient Forests’ is poignantly titled ‘Self Hatred’. I suppose self loathing must go hand in hand with nihilism and misanthropy: it would be quite a contradiction to despise all of humanity but love oneself?
SAD: “At first glance, it is as you said. It would be a contradiction to despise all of humanity but love oneself. But the essence here is that you don’t have to love yourself – you could destroy yourself over and over. That would be possible by redefining yourself. Endlessly. Destroy and create all anew. This would take tremendous effort (and that is the reason that most people despise such a way of thinking and living) and close to zero egoism. Combine all these, and you have the great contradiction, as you will have to oppose all the above AND nihilism (at least as it was described by Max Stirner).”

Of course, there is a big difference between self hatred and self pity. While feeling sorry for ourselves is counterproductive, a strong feeling of inward-directed hatred and resentment could be almost empowering – an acceptance that you are just another human and that ultimately humans are worthless, so nothing to lose…
Nadir: “The concept of inward-directed resentment that leads to the acceptance of human futility finds me agreeable, but I personally have to be not so absolute about the counter-productiveness of self pity. There is a little thing I do, since my adolescence, you could call it a private game. I deliberately immerse into self pity, let my mind sink in futile thoughts, and then, rush again to the surface, finding the air fresh as ever. Of course this might be just me.”

What are the qualities of humankind that particularly fill you with rage and revulsion? Greed, ignorance and vanity are three terrible, inherent traits that spring to my own mind. We’re top of the food chain but slither around the earth like snakes. Indeed, it can be difficult at times to think of any redeeming features?
SAD: “Greed and vanity are indeed two of them. If we wanted to be brief, selfishness can gather up, one way or another, all the qualities of humankind that make us outraged. Being at the top of the food chain just makes things worse; it makes humans arrogant and ignorant of their futile existence at the same time. Regarding redeeming features, humans are often not walking the normal path or following nature’s orders and it can be catastrophic at times, sometimes resulting in a remarkable outcome. This unconventional way of humankind is at least interesting. In another way of thinking, the diversity of humans makes it inevitable that we will find commonality with other humans and, as we are genetically programmed as social creatures, we feel comfort when finding similar-thinking people. Finally, humans create art. Not only in an aesthetic way, but more importantly in an abstract way as well. This is surely redeeming!”

Then, of course, we have religion. Even th 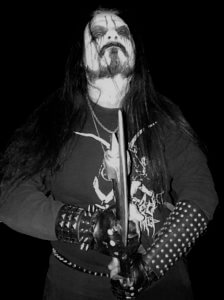 ough the idea of any divine presence existing has been torpedoed by science and an emphatic lack of evidence, seven out of every ten people on the planet subscribe to either Christianity, Islam or Hinduism. This is staggering. Why do you think so many believe in a monotheist supreme being? Is it because they can’t accept that death is permanent and that their time will inevitably run out (which goes back to ignorance and greed)?
SAD: “You just gave the answer already! Not accepting death is the main reason. Generally, it is weakness that leads to religion. People need someone to be responsible for everything, someone to put the blame on, but at the same time to obey. They need this unnatural lifelong father’s caress. They enjoy eternal thralldom.”

Another of the song titles that jumps out from the new album is ‘Enjoy Your Pettiness’. Who is this sentiment aimed towards? I encounter pettiness on an almost daily basis so it could probably apply to anybody!
SAD: “Yes, such a title could apply to anyone, but in this certain case, it is aimed towards Christians. Particularly, Orthodox Christians, as this is the main religion here in Greece. Most religious people here in Greece are unaware of what they are believing in.”

More poetic and less negative than the previous six, ‘Misty Breath Of Ancient Forests’ is an apt name for a SAD album as it alludes to the grim and raw nature of your music, which is deeply embedded in the subgenre’s glorious nascent era, with a distinctly frostbitten and shrill character. Is there a slight change of direction here, moving a little more towards the beauty and inexorable power of nature as opposed to all-out nihilism?
SAD: “We wouldn’t call it a change of direction. Our split album with Vöedtæmhtëhactått, ‘Existence To Serve The Creation (Not The Creator)’, is also nature-driven. Apart from that, the album title could be perceived either literally or as an allegory. The hint is at the small text on the tray card: ‘Like ancient forests, untouched by time. Like morning fog, breathing fog, our true selves lurk, waiting to be remembered…’” 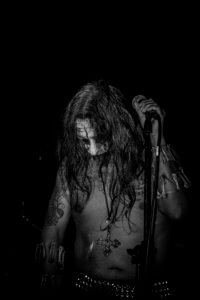 The music itself sounds like it could have been recorded in the ‘90s – traditional, eerie Black Metal with an insidious sense of melody and for me a definite Scandinavian feel. Would you agree that SAD has always sounded more like a Scandinavian Black Metal band than a Greek one? I’m assuming you are more influenced by the cold seminal hordes of Norway than warmer Hellenic BM?
Ungod: “Precisely! SAD’s music has always been influenced by Scandinavian Black Metal. It isn’t even close to the traditional Greek Black Metal sound. The greatest influence in SAD’s music (apart from the Norwegian hordes) is the Finnish Black Metal scene: Horna, Satanic Warmaster, Baptism, Sargeist, to name just a few.”

Listening to ‘Misty Breath Of Ancient Forests’, I am struck by the longevity, devotion and single-mindedness of your approach, how – across seven albums now and nearly twice as many splits – you have ignored all trends and fads and steered clear of any self-promotional whoring – a resilience which for me marks SAD out as genuine stalwarts of true Black Metal, imbued with the ancient spirit that marked the subgenre out as something special three decades ago. While many bands change with the wind, some of them pissing all over their raw Black Metal roots, why has it been so important to SAD to stick to your guns and remain dedicated to what is commonly referred to as grim Black Metal?
SAD: “When we started as SAD, we agreed to devote ourselves, as a musical expression, to the Black Metal genre in all its aspects. Therefore, we can’t be a misanthropic, grim Black Metal band and at the same time flood the social networks promoting our music. We stick to the fundamentals of this music, not trying to experiment on novelties. We can experiment in other expressions of our lives. In Black Metal we stick to the roots. We can’t give up the corpse paint just because it seems obsolete. We don’t care if something is politically incorrect as time passes by. We can do whatever we want in our lives, search, experiment or anything else, but anything that has to do with SAD will be done in an unchanged, devoted way. Black Metal has a musical and aesthetic concept and we intend to follow it.”

Everyday life is full of sadness, sorrow, melancholy and hopelessness. Is there any way to counteract this? Life can be incredibly difficult for anybody inflicted with a terrible loss or trauma. Wallowing in self pity is obviously not the answer, but it can be difficult not to. Perhaps the only option is to embrace the emptiness and futility of existence and accept our fate? Which of course is easier said than done…
SAD: “Indeed, life is full of sorrow and hopelessness but the answer might be not to adopt a blind optimistic view but instead a strategy of small victories. Life can be rather simple whereas on the other hand the thinking process is complicated. If we can find an amalgamation of these two, we might win our small victories to get over sorrow and hopelessness.”

With each passing day, it feels more and more like the world is at a tipping point. The so-called pandemic is wreaking havoc and there are also all sorts of political protests breaking out, riots on streets, civil unrest, the threat of economic ruin for many businesses and individuals, increased poverty inevitable. Do you believe we will find a way out of this and get back to the old normal? Or perhaps this is the beginning of the bad end that humanity was always destined to suffer?
SAD: “We are living in strange times. The revolution of information made all changes go at hyper speed and people can’t embrace the alterations to their life prospects. We are surely living in a time of great change. Which way are we going to head is very difficult to foresee. There is no reason for the individual to gamble over an optimistic or ominous scenario. One has only to do the best he can. But, if we had to make a prediction, it would be an ominous one!” 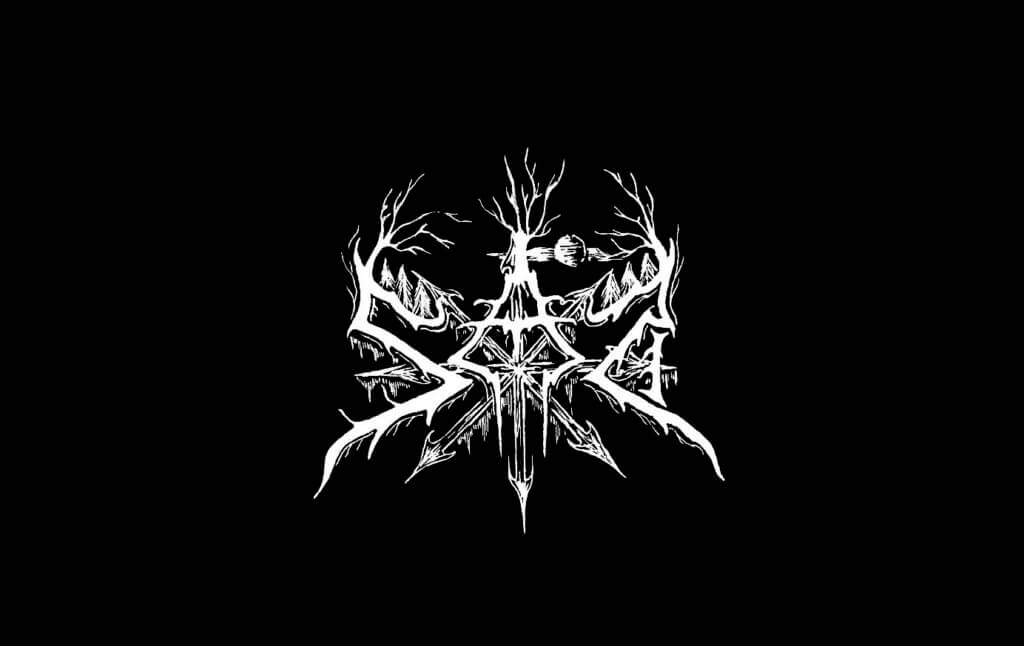