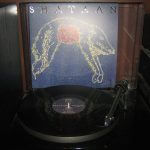 It would be fair to say that Shataan channel a unique and distinct sound all of their own. As soon as I started listening to their rather outrageous debut LP, ‘Weigh Of The Wolf’, the music sounded familiar to me straight away.

Probably because I’d previously encountered a few of their songs on the excellent ‘Desert Dances And Serpent Sermons’ compilation album and another one on the equally-sensational ‘Tlilitic Tlapoyauak’ 3LP.

To be fair, it’s the exact same formula again. It’s a winning formula, however, so I’m not complaining. Featuring the duo behind more-infamous Black Twilight Circle hordes Volahn and Arizmenda, this sounds nothing like Black Metal, really.